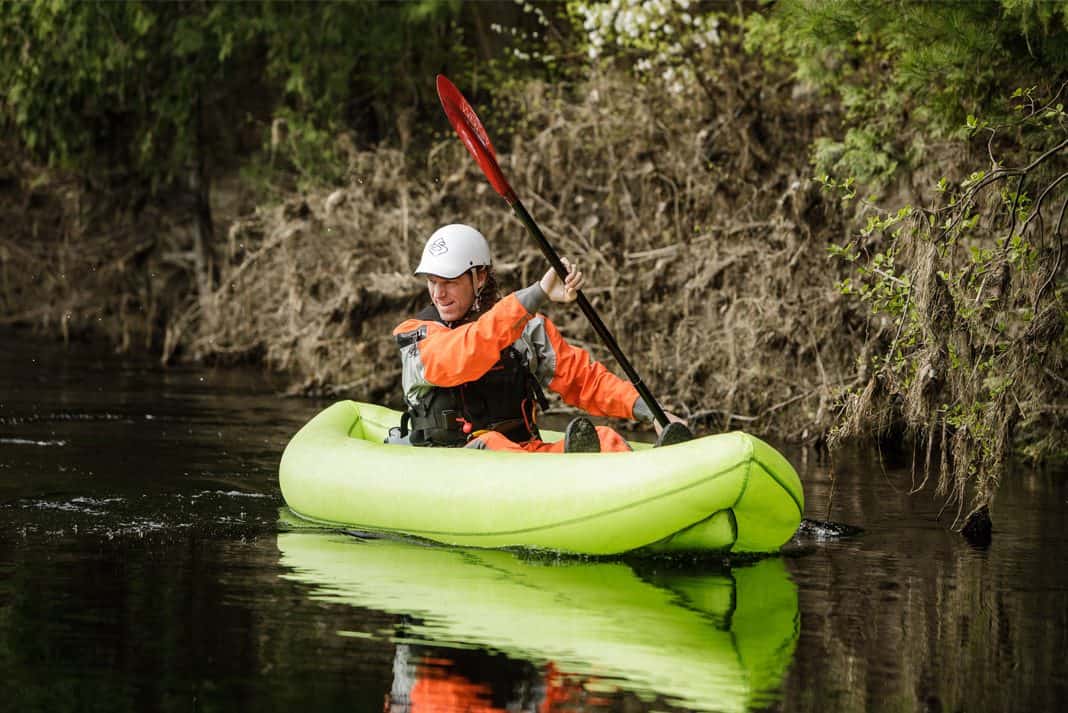 Ihad recently returned from a tradeshow where the new AIRE BAKraft Expedition packraft was revealed when I received an email from Cameron Dubé pitching a bikepacking packrafting story. I immediately wrote back telling him I’d source the boats if he’d organize the food.

The BAKraft Expedition bails itself out

Soon after the Second World War inflatable packable rafts used as survival equipment in airplanes began to appear in army surplus stores. Legend has it that in 1952, Dick and Isabelle Griffith did the first recorded whitewater packraft river run when they descended Copper Canyon in Mexico.

Sixty-five years later, packrafting seems like it’s the new big thing. Companies like Alpacka, Kokapelli and AIRE all making whitewater-specific lightweight inflatables that you can carry up rivers and paddle back down.

When AIRE first released their tiny BAKraft Hybrid in 2015 I interviewed marketing manager Sheena Coles. The original BAKraft is just seven feet long and only seven pounds. It was the first self-bailing packraft not requiring a skirt to keep out the water. Water runs out through holes in the inflated floor like any modern raft or inflatable kayak.

When Cam pitched the story last fall, I called Sheena and she sent us two pre-productions versions of the new AIRE BAKraft Expedition.

Embarking on an Expedition

After the bike ride up the river, in less than an hour we’d completely changed sports and shoved off from our sandbar. Typically in packrafts the bikes would be laying across the bow over top of our legs. We were happy to have opted for AIRE’s 10-foot Expedition and the room to have the bikes behind us for easier paddling and seeing our lines down the rapids ahead.

[ Read more: Fat Biking And Packrafting On The Black River ]

AIRE has included a daisy chain of lash tabs where the floor joins the collar. The seat and standard-issue thigh straps fasten in this way. The rest of the tabs we used to lash in drybags and the bikes. We had way more room in the Expedition than you’d ever carry on a bike.

BAKraft has a tough exterior

AIRE makes their rafts and inflatable kayaks with an outer shell to protect the inner bladders. The BAKrafts are the same. The bladder is an ultralight urethane AIREcell and the shell is a tough new Dyneema fabric. Dyneema feels like those reusable waxy sheets that hippy moms put in lunch kits to wrap sandwiches, except the Expedition material has a ripstop weave.

Very quickly we stopped thinking of the AIRE BAKraft Expedition as a packraft. How does it paddle? Just like an inflatable kayak. The boats pumped up firm and are extremely capable river runners. Even if you’re not packing a bike but just running whitewater rivers, carrying an extra three pounds to get a 10-foot kayak is worth it. Some guys go this route just so they can sleep in their boats with bug netting or a tarp draped over top.

We’d been paddling a solid seven hours when it started to get dark. The fading light wasn’t enough for us to distinguish deep water from thousands of shallow pillows in the boogie water swifts.

“How much abrasion do you think these floors will take,” I shouted over to Cam. We were both scrubbing up on rocks just below the surface. I felt like we were kids at a birthday party knocking around balloons waiting for them to pop. But they didn’t pop.

We were surely the first self-supported
fat bike packraft trip the river has ever seen.

In fact not only did we not pop the Expeditions, the rocks didn’t even leave a scratch or a scuff on the Dyneema. This material slides off rocks better than any raft or hard boat I’ve ever paddled. I feel like this is just the beginning for Dyneema. I bet we’ll see beefier variations appear throughout AIRE’s line of kayaks, rafts and fishing tubes.

If by chance we did puncture one of the Expeditions, AIRE includes a field repair kit. Simply patch the bladder and sew up the hull with the included needle and thread.

We were surely the first self-supported fat bike packraft trip the river has ever seen. Not to mention one of the first trips in the pre-production AIRE BAKraft Expedition. Imagine the possibilities presented by this very capable whitewater river runner that packs smaller than a four-slice toaster or can be rolled and strapped to your handlebars. Endless.