Allen Hutto was having one of those days.

He’d loaded his sea kayak for an early morning paddle, but on the way to the lake his car picked up a nail. Repairing the flat took a couple of hours.

The wind was whipping when he finally got to the boat launch at Lake Murray near Columbia, South Carolina, and most of the boat traffic had already called it a day. Not Allen. He’s been sea kayaking for 35 years and worked hard to improve his skills, training with the likes of Derek Hutchinson and Nigel Foster and earning his Level 4 Open Water certification from the American Canoe Association.

Allen enjoys paddling in lively water, and the wind ripping across Lake Murray was just what he needed to get his mind off the flat tire and the workweek ahead.

Kevin Outlaw and Will Dobose were having a day too. The longtime friends had gone out fishing that morning in Will’s 16-foot skiff and were well offshore when the wind began to rise. As they motored toward the ramp, the waves grew steadily larger.

Lake Murray is formed by the Saluda Dam, which stretches a mile and a half across the eastern end of the reservoir. It was the world’s largest earthen dam when it was built in the 1930s, and when the wind blows out of the west as it was that day, the waves pile up against the dam and double back on themselves. Kevin and Will would have to pass through this gauntlet of rough water to reach the boat ramp at the north end of the dam.

Kevin had his life jacket on and buckled before leaving the boat ramp. Though an avid fisherman, he’s not at all comfortable around water. In fact, in his 33 years Kevin had never ventured more than knee-deep in a lake or ocean. “If I go on the lake, I’m going to fish,” he explains. “I’m not going for any water sports or nothing like that.”

Kevin says urged Will to wear a life jacket too, but Will refused. The life jacket was too tight, he said. Later, as Kevin struggled to guide the little skiff though the building waves, there was no way he could put it on.

“The wind was so heavy, it was pushing more water into the boat than the bilge pump could put out,” Kevin recalls. “It just happened so quick.”

Allen estimates he was about 100 yards from Kevin and Will when their boat rolled over, near a set of massive concrete and brick towers that draw water into the dam’s hydroelectric turbines.

“They were about 90 degrees off my course and I just happened to look over and I saw the boat capsize,” he says.

In all the safety scenarios Allen had practiced at kayak symposiums, during his guide training and with paddling friends, this one had never come up: One kayaker, single-handed, aiding two big men in open water.

Allen didn’t hesitate. “I started yelling, ‘I’m coming! I’m coming!’ And I just spun around and hauled ass over there,” says Allen, who estimates it took him about a minute to reach the capsized skiff.

As he approached he could see Kevin floating in his life jacket, and Will holding tight to him with a look of panic in his eyes.

“I don’t think that other guy could swim,” Allen says, referring to Will.

In fact, neither Kevin nor Will is much of a swimmer. In the 60-odd seconds it took Allen to arrive, Kevin’s life jacket was the only thing keeping both of them afloat. “Will was holding on to me and I was staying afloat for the most part,” Kevin says. “So my thing was to make sure that Will didn’t let go. I kept telling him, ‘He’s just about here. He’s just about here.’”

When Allen reached the men he told them to grab the bow of his kayak, and once they’d latched on he took a moment to reassure them, saying, “We’re going to get you out of this. You’re going to be fine.”

Allen knew he was taking a chance assisting the two men, but the idea of not helping them never crossed his mind. “The only thing that went through my head was ‘Get your ass over there and help them,’” Allen says. He was in a Nigel Dennis Latitude sea kayak with a bomber spray skirt, dressed for the conditions with a full compliment of self-rescue gear. Most of all, he had years of rough-water paddling experience and rescue practice.

[ Plan your next rescue training with the Paddling Trip Guide ]

“I focused on getting them to hold onto the boat properly and just being ready to brace if I had to,” said Allen, who was using a Greenland-style paddle. Then, with Kevin and Will stabilized, Allen took a moment to assess the situation. The wind was pushing the trio toward the intake towers. Allen back-paddled between two of the stacks and took a hard look at the boulder-clad edge of the dam. It was about 400 feet downwind, across a jumble of rebounding waves. It wouldn’t be easy, but with 15 to 20 knots of wind at their backs Allen was confidant he could tow both Kevin and Will to shore. But then what?

“That dam is rip-rap, and the waves were coming down the length of the lake,” he says. “It would have been hard to get them up on those rocks without them getting banged up pretty good.”

Fortunately it didn’t come to that. Allen spotted a pontoon boat a short distance away and was able to get its attention. A few minutes later it chugged into position, and Allen helped Kevin and Will climb aboard. Soon they were safe ashore.

Allen is careful not to claim he saved anyone’s life that day. After all, Kevin was wearing a life jacket, and with the water temperature in the high 50s they had time—though not a lot of it—before hypothermia would set in. “Maybe they could have got to shore,” Allen muses. Then, after a moment, he adds, “The guy who didn’t have a life jacket on, I genuinely think he was in trouble.”

We’ll never know for certain what would have happened to Kevin and Will if Allen had not been there. Ultimately, the question is less important than the fact he was prepared to help. All those years paddling—the courses he took to improve his stroke, to master his roll, learn rescue techniques and incident management—they paid off that day on Lake Murray.

The rest came down to chance. “If I hadn’t had that nail on the tire, I wouldn’t have been there,” he says. “It was just one of those right place, right time things.” 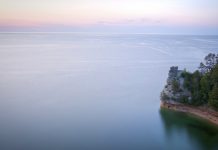 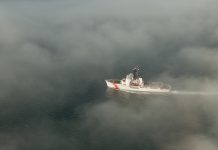 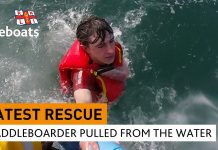