It only took three hours once I witnessed the first bits of ice being pulled into the fjord by the relentless ocean currents. This morning, the Agnassalik Fjord of Eastern Greenland was virtually ice-free. Now, this five nautical mile-wide passage was completely ice choked. Despite my efforts of navigating leads and bulldozing ice with my kayak, I was stuck. Very stuck. What would normally be an easy paddle back to shore was an exhausting struggle through an icy Arctic maze.

Ice has dogged mariners for centuries, brought feast or famine for ancient nomadic Inuit hunters, and stumped modern-day sea kayak explorers. One of the most fascinating and beautiful parts of high Arctic paddling can easily and quickly become one of the most dangerous. There are two main types of ice that the Arctic paddler—or even those stretching the season further south—might encounter, and each presents its own characteristics and hazards.

Sea Ice is the leftover frozen ocean from the previous winter’s freeze up. Chunks of ice, up to two meters (six feet) thick, float low and flat to the water surface. These chunks can drift close together to form an impenetrable pack, or slowly melt away by themselves. Sea ice pieces are generally quite stable, and are not likely to tip over or roll. If necessary, paddling close to sea ice is possible. When sea ice gets packed together, or is moved quickly by wind or current, it presents hazards to kayakers and mariners alike. Even relatively little ice coverage with any ocean currents possesses the ability to crush or strand a kayaker, turning a beautiful paddle into an extreme situation.

Berg Ice is formed on land as a glacier, and is calved from the toe of a tidewater glacier into the ocean. After thousands of years of snow accumulation, glaciers grow to be several hundred meters thick. The Greenlandic Ice Sheet is close to 3,000 meters (10,000 feet) thick, and produces the largest icebergs in the Northern Hemisphere. Icebergs can be as large as several city blocks, and can tower hundreds of meters out of the water. Even with the largest bergs, 75 percent of an iceberg’s mass is below the surface. As an iceberg drifts in the ocean currents, it melts faster below the water line, causing the berg to become top heavy. Without warning bergs can roll over, or even break apart, presenting a spectacular eruption of ice and water. Avoid falling ice and sudden waves by keeping your kayak well away from icebergs.

To determine a safe distance, estimate the iceberg’s height out of the water and double it. For example, if the iceberg is estimated to be 20 meters (65 feet) in height, you should paddle no closer than 40 meters (130 feet) to it. This serves as a rough distance guideline for a minimum safe setback. 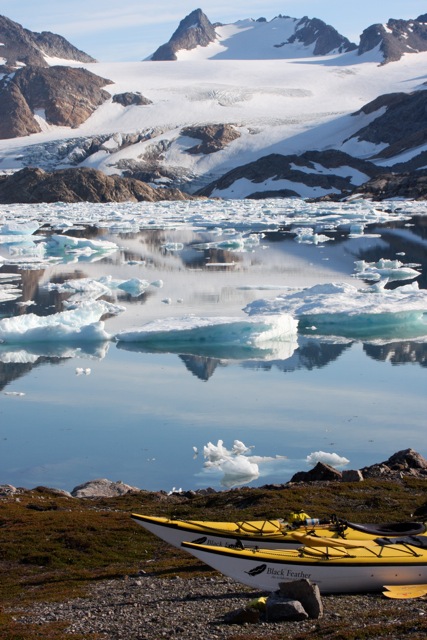 After four days of observing the ice-choked bay from the same campsite, expedition days were numbered. With extremely precise timing of tides, currents and daylight, I was able to inch towards the new expedition objective—getting home! During the brief hour of slack water, and favoring the ebb, the ice along shore became open enough to sneak a pod of kayaks through.

This was no easy task. Each mile took almost our entire paddling window. Once the ebb currents had picked up and began moving thousands of pounds of ice around, sitting in a kayak was the last place you would want to be. Leads start to close, kayakers get separated and kayaks can easily and quickly be crushed.

Each remaining day presented a new, yet familiar challenge. With careful ice and water reading, the expedition had a successful and safe ending, not to mention invaluable lessons and experience from the world’s greatest instructor—the waters of the Arctic Ocean.

Steve Ruskay is a Kokatat Regional Ambassador, and the lead guide at Black Feather – The Wilderness Adventure Company. He spends his summers guiding sea kayak expeditions in the high Arctic.