Not all launch sites are gentle, sandy beaches. Sometimes, launching from a rock, a ledge or pier offers the best access to the water. That’s when a seal launch comes in handy. For a successful seal launch, commitment is key. Just be sure to check the landing spot for hazards and ensure the water is deep enough for this maneuver. Most of the time a seal launch isn’t necessary, but it is always fun.

5 Steps to Land the Seal Launch

Set up with your boat at the edge of the drop with the bow hanging out over space. Be sure to get in with the center of gravity of the boat well back so that you don’t risk pitching forward unexpectedly into the water.

Once in the kayak, carefully move your boat forward close to its balance point on the brink.

2 Ask for a helping hand

The easiest way to ensure a good launch is to enlist the aid of a partner who can give you a strong shove off, thus guaranteeing some speed on the launch. Have your partner pick up the stern of your boat and shove you into space.

Go for speed and commitment off the launch pad. Just shuffling forward to the balance point will cause the kayak to pivot on the brink until it reaches vertical and slips off the edge, potentially depositing you on your head. Aim for a 45- to 60-degree angle off of the launch.

Most paddlers naturally seem to want to lie on the back deck, which is a bad idea because it weights the stern and promotes a flatter, more painful landing.

Instead of lying on the stern deck, you should be in a slightly forward or neutral position that will encourage your kayak to enter the water nose first. In the air, watch the spot where you’ll land—this also helps to keep you slightly forward.

The most dangerous aspect of a seal launch is caused by the dilemma of what to do with the paddle. The main danger is “eating” the paddle shaft. The two best positions for the paddle are either at the waist in a low-brace position, or held overhead.

Overhead puts you in a good high-brace position after landing. The key is to have the paddle shaft well away from your face. If holding the paddle overhead, be sure to keep the arms bent and fists well forward of the shoulders, allowing plenty of shock absorption through the arms to protect the shoulder joints.

Just before impact, leaning slightly back will help to lift the bow and promote a nice controlled resurfacing.

5 Buoyancy does the rest

If everything goes to plan, you will land at an angle between 45 and 65 degrees. The bow will pierce the water and then the buoyancy in the kayak will quickly drive the bow back to the surface. This swoop beneath the surface in a 17-foot touring kayak creates a beautifully cushy landing compared to that of a flat-bottomed whitewater boat.

Note: If your whole group is entering the water this way, it means that the last paddler will have to launch alone, without someone else’s help. This is much more difficult than an assisted launch as it is very hard to get a really good push-off and the speed needed to clear the stern of a long boat.

A self-guided seal launch can certainly work, but sometimes it’s easier to simply throw your kayak over the edge and jump in after it. A quick reenter and roll or bow tip-out rescue at the bottom and you’ll be ready to go.

Most of the time a seal launch isn’t necessary, but it is always fun! It also promotes the valuable lesson of committing to a stroke or maneuver. For instance, an aggressive launching philosophy serves one very well when leaving shore in surf. An active and committed paddler is always better off, especially in a tough spot, than a passive, undecided one.

Most of the time a seal launch isn’t necessary, but it is always fun. | Feature photo: Josh McCulloch 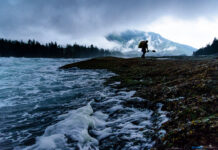 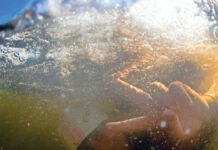 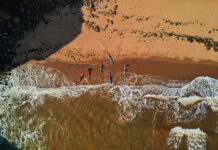