For a fully outfitted tandem canoe with end and center air bags, rolling is the most efficient form of self-rescue and an invaluable skill in big water. The roll requires the correct technique, proper outfitting and that magical synergy of communication and cooperation to ensure smooth timing and success.

Ensure your tandem boat is properly outfitted with center and end air bags as well as thigh straps. A tight fit allows the boat to become an extension of your body.

When practicing the tandem canoe roll, it will be easier to start the roll with both paddlers set up in the low-brace position on the same side of the boat. Flip toward your now-shared paddling side. Relax and look around when you get underwater.

2Position Your Paddle and Roll

Swing your paddles and torsos out until they are perpendicular to the boat and rotate your shoulders so they are at—and parallel to—the surface, facing down. You will have to have worked out your timing so you are rolling at the same time. In one popular method, the stronger roller counts to five while setting up and then initiates the roll.

Meanwhile the weaker roller switches hands on his paddle if he has not already done so, sets up on the rolling side and then waits for the stronger paddler to initiate the roll.

With your bodies and paddle blades as close to the surface as possible, and with very little pressure on your paddles, push away with your legs on the non-paddling side and pull up with the opposite knees, rolling the boat on edge.

Think about your lower bodies rolling the canoe and then your arms and paddles getting you both into the boat in the next step.

4 Bring Yourself Into the Boat

Now that you have the boat up on edge, it’s time to get into it. You will find yourselves in the low-brace position, bodies and paddle blades at the surface, faces in the water looking straight down.

It is important for both paddlers to finish the roll by bringing their bodies into the boat at the same time. Be smooth and don’t rush it. Tandem canoes don’t snap upright.

Finish the roll by keeping your heads low as you bring them across the boat to center the weight. Don’t sit up until your heads have reached the far gunwale and the canoe is level. Then one paddler starts paddling to build momentum and gain stability while the other quickly switches back to his paddling side.

It is possible to do a tandem roll even if one paddler cannot roll on his own. Tandem rolling is a great way to teach the feel of rolling to someone just learning.

Although tandem boats haven’t changed all that much in recent years, attitudes about rolling have—more solo paddlers are rolling than ever before. Tandem canoes aren’t harder to roll, they’re just slower. The principals for rolling a tandem are the same: Get the boat up; then get in it.

Most confident solo rollers can actually roll a tandem canoe. So let’s put that person in the stern and focus on the bow paddler.

Really strong rollers can get a small bow person to tuck and just wait to be rolled up—a strategy used by many husband and wife teams. Effective maybe, but this isn’t the teamwork that makes tandem paddling so much fun.

Here are two ways the bow paddler can help get himself back in the boat. Both work, I’d argue one is just more contemporary.

The bow paddler switches hands underwater. Count, “One steamboat, two steamboat, three steamboat,” then the duo rolls up together on the same side. I don’t like this for two reasons: You risk losing your paddle switching hands underwater, and when you roll up your paddle is on the wrong side. Besides, I’m a canoeist and only have one good side—I can’t paddle, let alone roll on my left.

Let’s let the strong stern paddler roll the boat up. Meanwhile, the bow paddler sets up for an offside high brace roll or an offside low brace roll. What? Yup, these feel as awkward as they sound. I figured out the motion on my living room floor with a broom for a paddle. Both are quick to set up and offer enough momentary resistance to get your torso back in the boat. With an offside brace roll you don’t waste time changing paddle hands, plus you roll up in an aggressive cross forward position ready to paddle your swamped pig to the nearest eddy.

The tandem canoe roll is an open boater’s most efficient self-rescue, if you know the secret. |  Feature photo: Rob Faubert 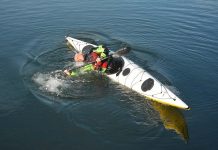 Master How To Sweep Roll A Kayak 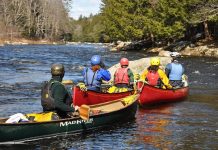 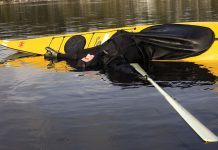 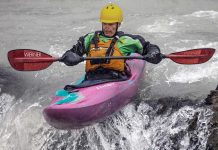 How To Run Small Drops In Your Kayak 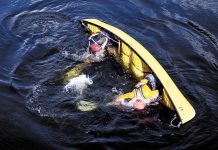 5 Steps To Roll Your Tandem Canoe