You know the living is good when you spend the morning ski touring untouched snow high in the alpine, and the afternoon boofing your way through spectacular limestone canyons. The Balkan Rivers Tour 2 team hopped a ferry in Venice, Italy after paddling the Soča River from source to sea and landing in Igoumenitsa, Greece days later. From the mountains that act as the source for the rivers below, the team followed the water from up high to down low. But hearing the blast of dynamite while sitting around the campfire at the end of the day seemed to take all the good lines from the river and mountain and replace them with a sickening feeling of being helpless and angry. 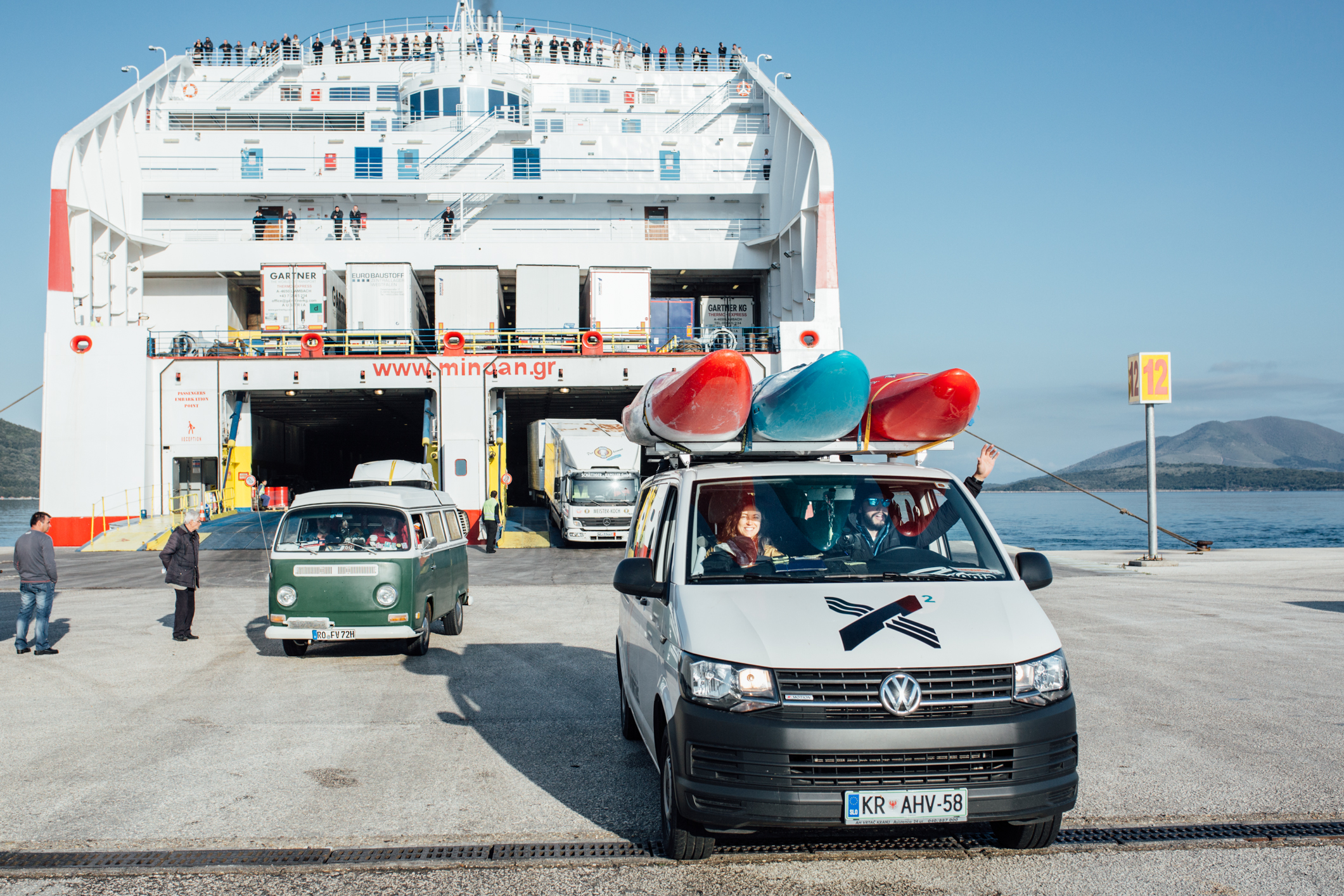 The focus of the Balkan Rivers Tour is two-part. Draw attention to the beauty and adventure sports tourism potential in these relatively unknown areas of the Balkans. But also to shed light on the injustice and construction of hydropower plants and dams in these last untouched valleys of Europe.

The Metsovitikos River runs through a deep valley in Epirus, Greece, and is one of the primary tributaries of the Arachthos River. A section of exciting whitewater runs through rust-coloured rocks, a hundred meters below the highway and under a massive bridge. But only a section had enough water to paddle and was littered with rebar, garbage and discarded concrete. 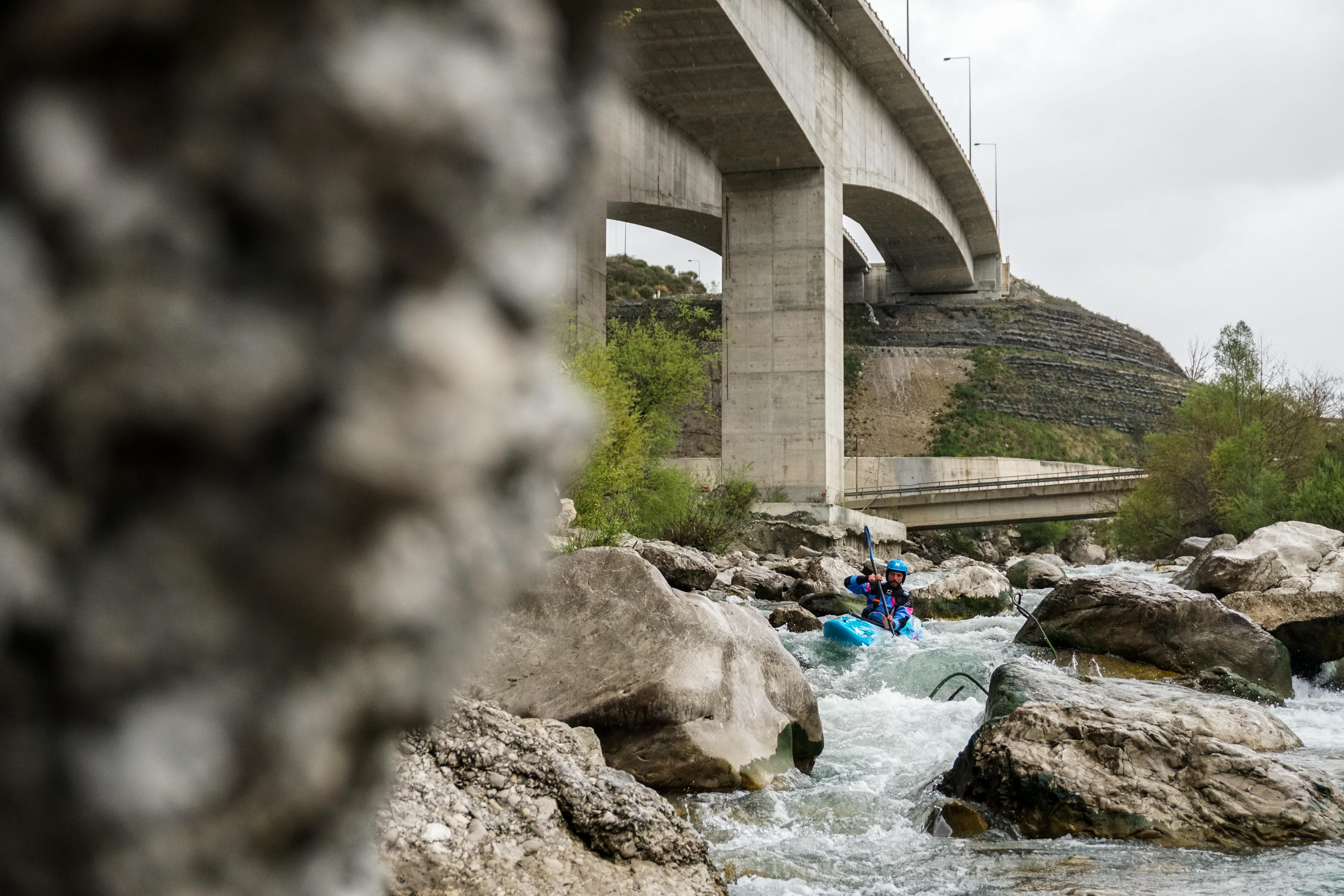 After spending two days skiing in the snow-filled and almost endless ranges of the Smolikas Mountains the BRT team were excited to paddle. They knew the Kaliaritikos and Arachthos Rivers would be scenic, but had no idea these two joining rivers would completely take their breath away – multiple times. It was the first time paddling in Greece for two of the three BRT kayakers, and the high, colourful limestone walls, lined with electric green trees and purple blossoms meant they were paddling looking up for most of the afternoon. Even at the low water levels available, the lines and rapids were playful, with the potential to be challenging at higher water. The river squeezes into tight, two to three meters canyons at times, then opens to faster flows passing waterfalls and springs bursting out of the karts walls. 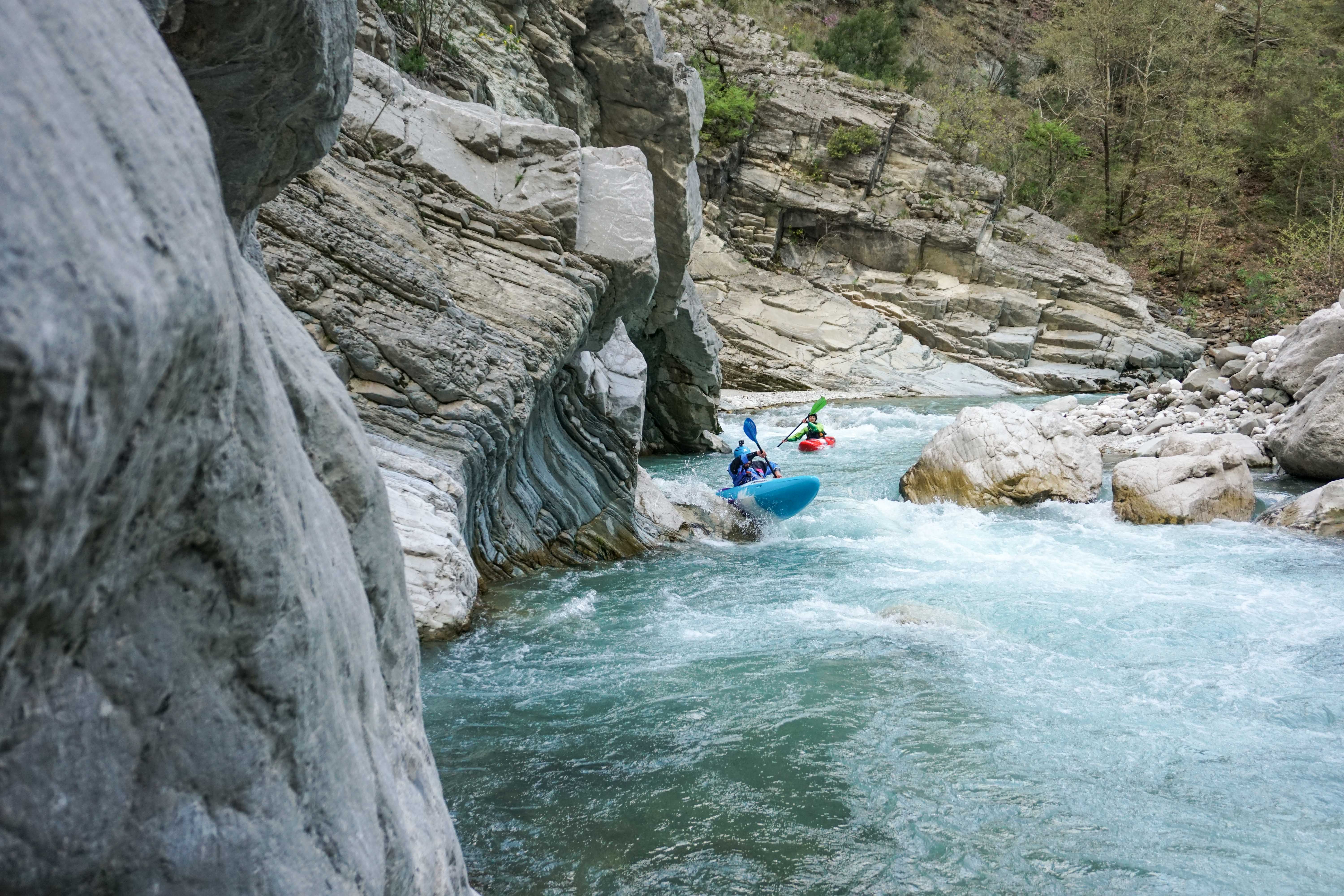 After a couple night at Via Natura Kayak Camp in Plaka, Greece, which is the takeout for the Kaliaritikos and Arachthos and the put in for the lower Arachthos, they moved on to the Voidomatis River. After a steep trek down from the town of Vikos, they paddled the clear water with a combo of rain and sun accompanying them. The smooth boulder gardens of the Aoos offered more challenging whitewater, and the still cliff and fingers of rock were lined with bonsai-like pine trees, endemic to the area. Time spent on the water in Greece was equal parts whitewater kayaking, and enjoying the remoteness and scenery that a kayak gives you access to. The team was not seeking the most technical rivers but taking the time to find beautiful wild rivers, rivers threatened by dams, and rivers already dammed. 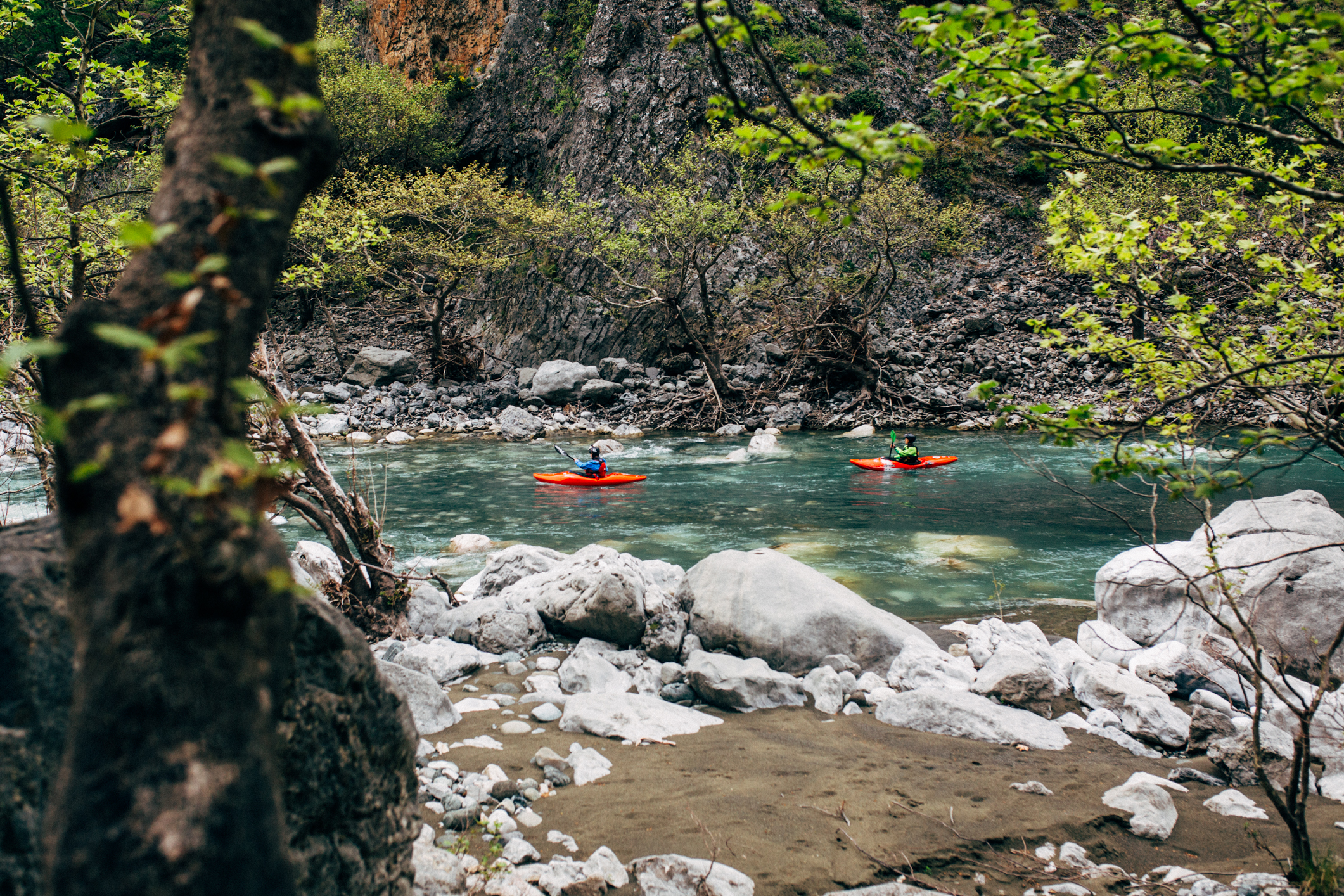 Driving into Albania, the untouched rivers of Greece were contrasted sharply with the litter-filled tributaries of a country still developing. Driving into Valbona Valley National Park, the team felt relief and relaxation as the left the busy Albanian towns, but were immediately faced with corruption and destruction as fences along the raod blocked the view of construction of three illegal hydrodevelopments already being built in this National Park. 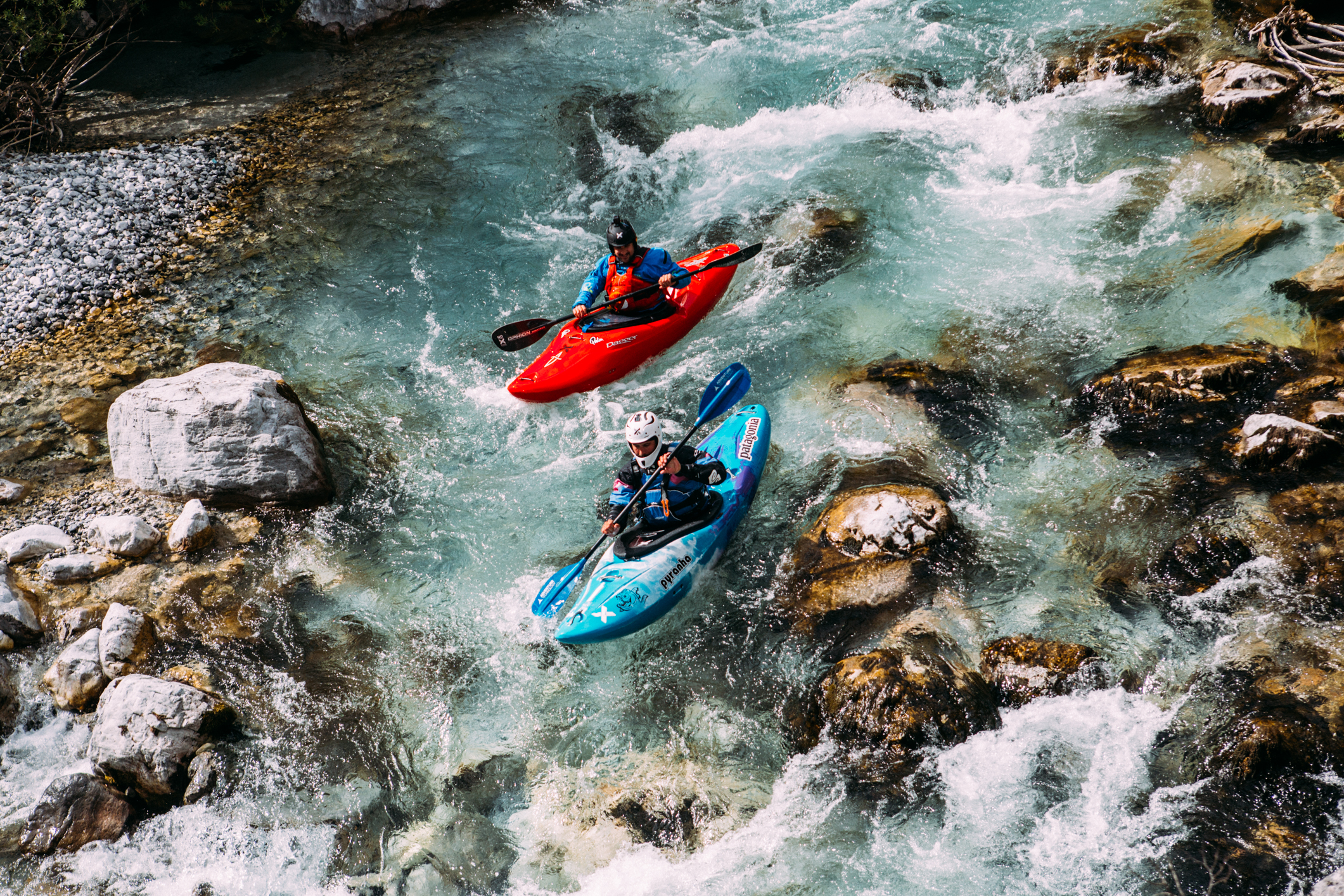 Eleven months ago when BRT 1 came through to paddled the Valbona, the valley was untouched with just talk of these dams. Today, a fresh roads cut a scar across the mountainside and the best section of class V kayaking has bulldozers clear cutting right to the edge of the water. In just weeks, bulldozers and construction trucks will be working right down to the edge of the most technical and most beautiful section of class V whitewater. In a few weeks, this section will be destroyed forever.  With Slovenian-like Alps on one side and lush forest on the other, the Valbona River is like what the Soča River in Slovenia was like before dams were build there. Foreign visitors to the region often remark they had no idea such an unspoiled, pristine place still existed in Europe. But the race against the clock and the Albanina Government is on.

With bulldozers and dynamite already invading the valley, the BRT team put together a short video to share with the world what is going on, with the hopes of creating international recognition of the river that would put pressure on the Albanian Government to halt construction and perform a proper environmental assessment.

To take action and add your voice to the fight for the Valbona, share the video Valbona Under Attack and write your own message, tagging Albanian Prime Minister Edi Rama on social media. It doesn’t matter where you live, if you paddle or enjoy wild rivers, this one is worthy of protection.

The tour will wrap up with an all-are-welcomed paddling action on the Morača River where the BRT team and kayakers from all over the world will kayak for 8-days in a source-to-sea descent of the Morača River, traversing Skadar Lake, and onto the Bojana River before paddling into the Adriatic Sea. With two full days of festivities including concerts, food and DJs will BRT 2 will come to end, but the fight for wild rivers will continue. Check out the BRT Facebook Page and Wild Party for Wild Rivers for more info and follow along as we paddle the beautiful Morača starting tomorrow!