The sun is just peaking out over the Julian Alps, in western Slovenia. A lone skier starts down the mountain, making sharp turns on the crisp snow as a paraglider comes whipping overhead, skis dangling in the air. These are the starting minutes of Balkan Rivers Tour 2, a river conservation movement that has been gaining momentum since it’s start this time last year.

It’s 7:15 am on March 30th and Balkan Rivers Tour (BRT) headman and founder Rok Rozman skies to a stop as Žan Kunčič drifts to land at the bottom of the mountain. They have intentionally selected this winter zone as the start of the first leg of the tour as it is ultimately the source of the Soča River – the focus of the first third of this year’s tour. Following the path of the snowmelt to the river bank, 35 kayakers will slide into the emerald water of the Soča later that same day, embarking on a 138 kilometer mission to paddle the Soča from source, high in the mountains of Slovenia, to the Adriatic Sea in Italy. The Soča Source-to-Sea Action has two intentions; paddling whitewater, and raising awareness about old, inefficient hydroelectric dams as well as the threat of new dam development. 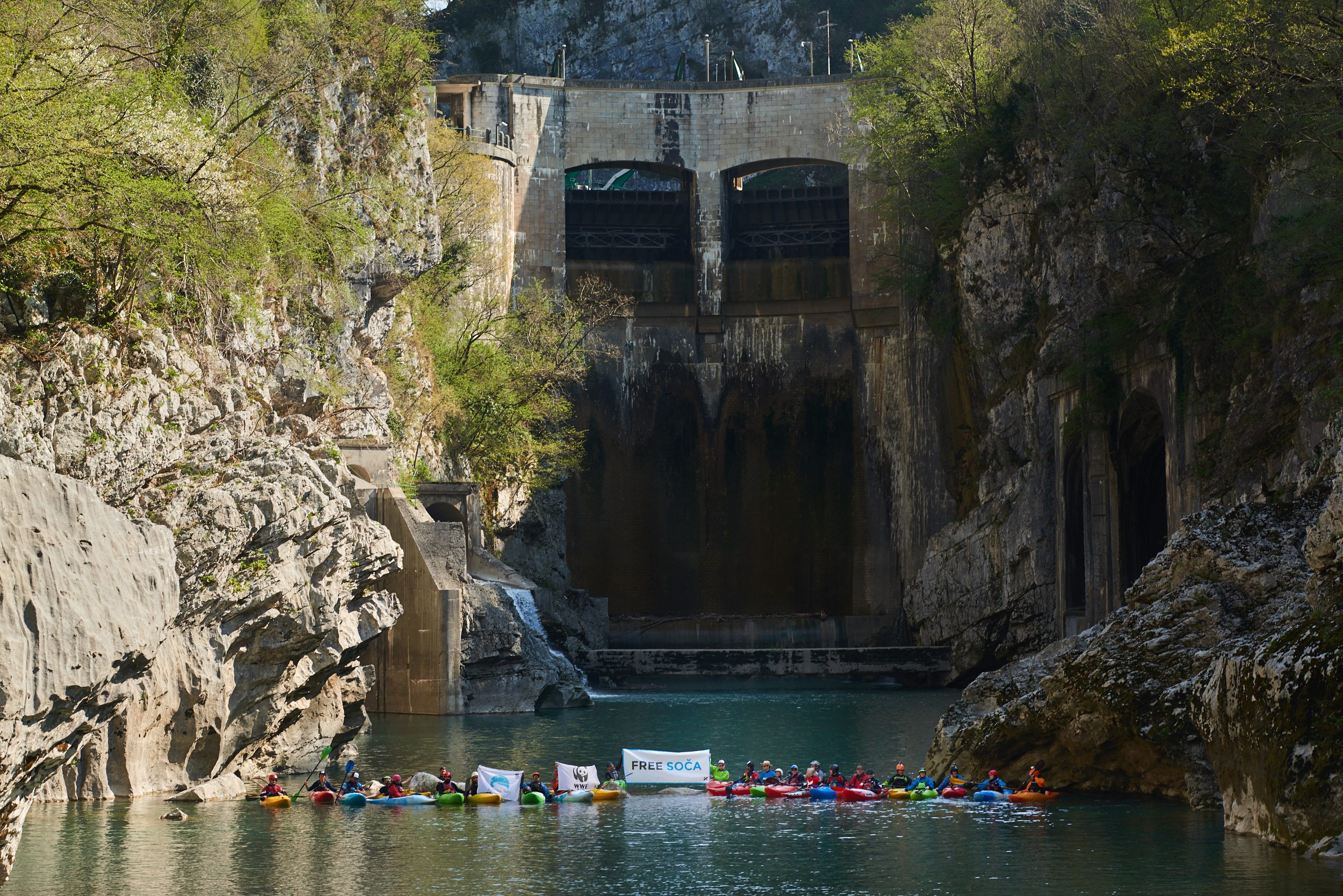 In front of Podselo, the first dam on the Soča,  the Balkan Rivers Tour poses for a photos before paddling on, scraping along rocks and shallow spots in the stunned flow of the dam-choked lower Soča. Photo: Jan Pirnat

After a successful inaugural year in 2016, the Balkan Rivers Tour team are creating another wave of river conservation. The overarching goal of this years’ month-long tour of the Balkans is the same as last year; protecting free flowing rivers, while simultaneously showcasing the recreational potential of these rivers. However, this years’ tour will incorporate a multi-sport element, looking at the threatened rivers and valleys of the Balkans through ski touring, fly fishing as well as whitewater kayaking.

After a morning on the snow, the BRT team joined local politicians, paddlers and conservationists in Triglav National Park for a press conference, furthering conversation about hydropower and discussing the threats the Soča faces, namely the steps being taken to dam the two main tributaries of the Soča—the Učja and Idrijca rivers—as well as the threat of another hydro dam being created on the free flowing upper section of the Soča. These dams would destroy this whitewater haven which hosts thousands of kayakers each year and a section of river where more than 100 international rafting companies operate in the summer. 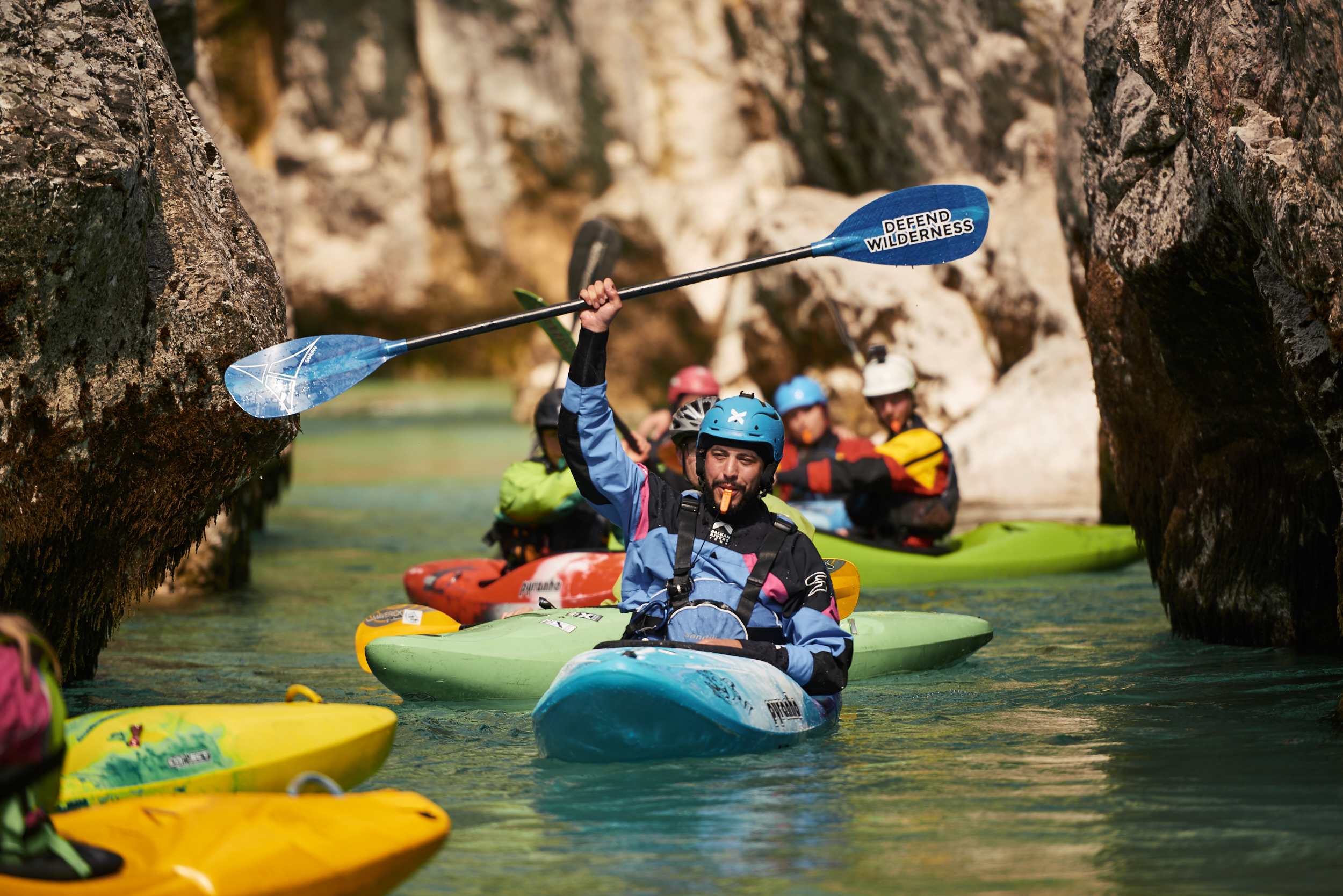 Balkan Rivers Tour founder Rok Rozman leads the mass of kayakers through the first box canyon of the Soča, on the first of 4 days of paddling. Photo: Jan Pirnat

The Soča River community is strong and support for the conservation of the river and the tour came from paddling schools, shops, restaurants and campgrounds as the group of paddlers descended from the mountain flows into the valleys and crystal clear swifts camping and celebrating the Soča through local music, food and beer. After two days of paddling the unobstructed and wild Soča, the kayakers were forced to shuttle around and rappel kayaks around the first and biggest dam on the Soča where each paddler could taste the contrast between the free slowing Soča they paddled the day before, and the stagnant and concrete clogged river below the dam. With three hydro dams on the lower section of the Soča in Slovenia and four in Italy, paddlers were prepared to portage lots and many people switched from whitewater boats to sea kayaks in anticipation of the slow flows that each dam creates.

Passing through towns, under bridges and through wilderness pockets the flotilla crossed into Italy after portaging around the Solkan dam. After dragging boats around dams and weirs on the Italian section of the river, the kayakers neared the sea side, observing changes in the shoreline vegetation, the colour of the water, the birds overhead.

With more than 40 articles published within Slovenia, five in Ital and many internationally, the Tour is gaining more publicity and recognition with each dam they encounter. On April 2nd, under the warm evening sunlight the group reached the salty water of the  Adriatic sea, where people hugged, high-fived and toasted each other from kayaks celebrating the Soča and this source-to-sea descent.

The goal behind the Balkan Rivers Tour is simple and organic but the awareness and conversations it is generating are complex and passionate. With discussion on dam removal as well as halting the development of more, the idea of free flowing rivers is a cause worth fighting—and paddling—for.

For the next two weeks, a condensed BRT team consisting of four members will continue south, boarding a ferry to Greece where they will explore the Dinaric Alps through skiing, fishing and kayaking. Follow along on Facebook to get a taste for the mountains, water and culture of this pocket of the world. Or, come experience these free flowing but threatened rivers and paddle along with the tour, paddling 200 km of class III to V whitewater, ending with a Wild Party for Wild Rivers at Bojana river delta on the shores of Adriatic sea on May 1st.