I’m lounging on a gravel bar, drinking a beer after a long day on the river and a long search for camp. The Tatshenshini River rushes by snow-capped mountains for another 70 miles to the Gulf of Alaska. The whole time I’m thinking, “What a crappy place for a mine.”

From 1988 to 1993, the Tatshenshini and Alsek rivers—two of the wildest and most gorgeous rivers in North America—teetered between remaining wild rivers and becoming piles of toxic rubble. Thanks to people I’ve never met, this is now one of the largest protected areas in the world.

In the ‘80s, mining company Geddes Resources Limited claimed it found $5 billion of copper under Windy Craggy Mountain, up Tats Creek in the British Columbia portion of the Tatshenshini River. Windy Craggy was in unprotected land ringed by Glacier Bay, Wrangell-St. Elias, and Kluane national parks in the Alaska-Yukon-British Columbia corner. Geddes proposed digging out the mountain into the world’s largest open-pit copper mine, piling the tailings on a glacier, piping the slurry to Haines, Alaska, and selling it in Japan. They would chew 50 million tons of rock off the mountain every day for 15 years.

At the time, the odds seemed against the rivers. The economy wasn’t great and Geddes promised jobs. Few people had even seen the remote river. The fight started with local river runners, climbers, bear biologists and wilderness lovers in Haines and Whitehorse, then spread to Victoria and Juneau. Then it went from state, provincial and territory capitals to Ottawa and Washington, D.C. International conservation groups took up the cause. When Al Gore was elected Vice President in 1992, the writing was on the wall, since the pipeline would require a treaty. In 1993, British Columbia denied the mine leases and designated Tatshenshini Provincial Park, creating a four-park complex protecting the entire Alsek-Tatshenshini basin.

Drinking my beer on our gravel bar in the park, I think back to my young adulthood during the campaign. The summer after the proposal, when I was a Forest Service seasonal, I heard about the Windy Craggy Mine. It was one of many schemes flitting in and out of the Alaska consciousness, part of the region’s ongoing struggle to balance industrial-scale extraction, tourism, sustainable fisheries, stunning beauty and pristine ecology. Two years later, I was working at a river conservation group. There was a massive poster on the wall, showing rafters floating past icebergs below giant mountains. It was from the campaign against the mine: I’d paddle through the same scene a few days below our gravel bar camp. Back in ‘92, the outfit I worked for was starting to work on a book called How to Save a River. Much of it could have been based on the Tatshenshini campaign. Some was.

Three decades later, the idea of digging up a mountain next to three national parks and piling toxic tailings on a melting glacier draining into a salmon-bearing river is ridiculous. The Tat has achieved river-trip-of-a-lifetime status, with permits as coveted as the Grand Canyon and the Middle Fork of the Salmon. It took five years to get ours. Outfitters in Haines and Whitehorse base their business on the Tat and other nearby rivers. Fifteen years of copper became 30 years and counting of ecotourism, plus the enduring though harder to quantify value of scenery, grizzly bears, salmon and not having to clean up toxic sludge.

As part of our trip prep, we poured over maps and practiced river rescue. I gave myself another task—I found the old coffee-table book the Tatshenshini Wild campaign produced in the early ‘90s, and I read it cover to cover.

I’m forever indebted to the river runners, climbers, biologists and others who put their oars, crampons and paddles aside in the ‘80s to write articles, review studies, appeal permits and trek from Haines and Whitehorse to Victoria, Ottawa, and D.C., time and again. On the drive to the put-in, our shuttle driver rattled off the names of locals who had been part of the campaign.

Behind every river we run today are the stories of people who fought hard to protect those places, years, decades or centuries ago. On the Grand Canyon, it’s names we know well: Martin Litton and David Brower. More often, it’s just hard-working locals. On the Tat, the only names most people recognize are Gore’s and maybe conservation photographer Robert Glenn Ketchum. So, let’s hear it for Ric Careless, Michael Down, David Evans, Heather Hamilton, Stephen Herrero, and more I’ll never know. 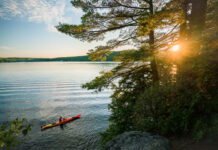