This article, written by Roy MacGregor about Tom Thomson’s mysterious death and the woman who loved him, first appeared in the Summer/Fall issue of Canoeroots.

Everyone knows the two questions at the heart of the mystery surrounding famous artist Tom Thomson’s death: Who did him in and where is he buried? But there are mysteries within those mysteries, and none so spine tingling as what became of Winifred Trainor’s old home.

Winnie Trainor, a Canoe Lake cottager, had been one of Tom’s many girlfriends, but one so special he was said to have arranged a honeymoon cabin at Billy Bear Lodge just before he went missing on July 8, 1917. He had often stayed with the Trainors in the nearby town of Huntsville and the day-by-day paintings he created that spring had been left to dry in the Trainors’ cabin on the northeast shore of the Algonquin Park lake where he drowned—or more likely was murdered.

Winnie never recovered from the shock of his death. She and her mother spent the winter and spring staying with relatives in Philadelphia, raising local suspicions that she had really gone there to give birth to Tom’s child… 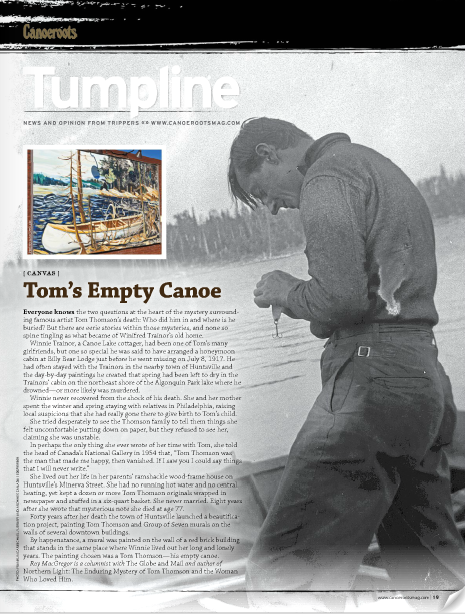 Get the full article in the digital edition of Canoeroots and Family Camping, Summer/Fall 2014 on our free iPad/iPhone/iPod Touch App or Android App or read it on your desktop here.