How do you create a tougher canoe without increasing the price or weight? Some manufacturers claim they have answered this age-old quandary with the composite material Innegra.

Though not a new material, Innegra has gained popularity on the water this year. The polypropylene-based fiber is being woven into canoe and kayak hulls to complement other high performance materials, like carbon, aramid and fiberglass, creating well-priced, extra durable designs.

“I tested our Innegra boats by doing things I’ve never done to a composite hull in 28 years,” says Nova Craft Canoe president, Tim Miller. Nova Craft released new material TuffStuff, an Innegra and basalt blend, earlier this year. To test the prototypes, Miller subjected them to a battery of tests including vices, sledgehammers and being thrown from a 10-story factory rooftop (view the video here).

For the toughness and price point, “there’s nothing else quite like it,” he adds.

Innegra is produced exclusively by Innegra Technologies, located in Greenville, South Carolina. Major markets for the yarn include the automobile, military and sporting goods industries. In the paddlesports industry Innegra is also found in helmets, rescue ropes and paddleboards.

“Innegra was designed to fill a need for strong, damage-resistant and cost-effective lightweight composite materials,” says Mark Smith, president of Innegra Technologies. Pure Innegra is not rigid enough to make a canoe or kayak hull, but when combined with other composites the result can be impressive. “It’s lighter than fiberglass, less expensive than carbon, buoyant, impact-resistant and dampens vibrations.”

Though Innegra was first manufactured in 2003, Adventure Technology Paddles were among the first to popularize the material in the pad- dlesports industry with the 2013 release of their Duraweave whitewater kayak paddle series. The blades have been heralded as some of the lightest and strongest on the market.

Not everyone is enthralled with Innegra, however.

“We don’t see it as a game-changer,” says Bill Kueper, vice president at Wenonah Canoe. In 2010, Wenonah introduced an Innegra-containing canoe called the Barracuda. “We made more than 100 Innegra-contain- ing canoes and we didn’t see a true advantage to the consumer in price or durability [over other Wenonah products].”

Kueper adds that Wenonah has Innegra in stock for further research and development, but there are no immediate plans for its use. Mad River Canoe is also testing Innegra for possible future use in their line of composite canoes.

According to Jeff Hill, owner of H2O Canoe Company, which released an Innegra blend as part of its new Epoxy Pro Series, a couple factors have contributed to Innegra’s recent popularity.

“Everyone who makes canoes is challenged by the consumer to create a tougher product. If we even get a sniff that there’s a tougher material out there, we’re going to chase after it,” says Hill. “I think everyone knows that for 10 years the canoe market has been fairly stale in technology—a new material is exciting.”

H2O’s Epoxy Pros were a hit at spring tradeshows. “We’re very happy with Innegra,” he adds, “however, we are careful not to say it’s the be-all and end-all. Nothing is indestructible, and it doesn’t fill the entry-level price-point void that is left by Royalex.”

The material void on the market, created when hull material manu- facturer PolyOne ceased Royalex production in April 2014, has likely contributed to Innegra’s rise in popularity. “It seems like it’s the right material at the right time,” agrees Nova Craft’s Miller.

Innegra Technologies reports five additional canoe manufacturers have been in contact for samples, and it expects we’ll see more Innegra-blend canoe and kayak hulls on the water soon. 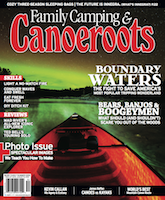 This article first appeared in the Early Summer 2015 issue of Canoeroots and Family Camping magazine. For more great canoeing content, subscribe to Canoeroots’ print editions and digital editions, download issues on your device or view this issue for free on your desktop here.