Chicago is famous for many things—astonishing skyscrapers, Art Deco architecture, the blues, Al Capone, Michael Jordan and the Bulls, Navy Pier—but paddling isn’t generally one of them.

Ask a local about must-have Chicago experiences, however, and they might recommend a sunset tour up the city’s central artery, the Chicago River; or an afternoon in the surf when the wind is blowing over Lake Michigan.

Heading up the Chicago River from the lake, paddlerIllinoiss are immediately engulfed by the city. A chasm of glass and limestone towers a thousand feet above the river—it’s a landscape every bit as dramatic and improbable as the Grand Canyon.

[ Also read: A Tandem Kayaking Adventure Down The Grand Canyon ]

“This is the paddle we do when people come to visit,” confirm Chicago locals Alec and Sharon Bloyd-Peshkin, founders of Have Kayaks Will Travel. “It’s just spectacular, especially in the fall or in the evening with the sun setting behind the city.”

For a memorable, half-day kayak or paddleboard tour, join Kayak Chicago (www.kayakchicago.com). Evening tours head downriver after dusk, ending at Navy Pier with a spectacular fireworks display. Have Kayaks Will Travel (www.havekayakswilltravel.com) offers informative, small-group tours, including a Devil in the White City trip based on the Erik Larson page-turner. “We paddle kayaks or canoes in the area the book is set in, on Chicago’s south side,” says Sharon, “exploring what happened here during the 1893 World’s Fair.”

“Look at Google maps and you’ll see why Montrose Beach gets the most amazing reflective waves,” says Alec. He also recommends Rainbow Beach for excellent surfing when the wind is north or east, with maximum fetch out of the northeast. “Both of these beaches have a fishhook shape that catches the northeast waves really well.” Launch at the north end of Montrose, by Wilson Park.

“Put-in on the Chicago River just west of Chinatown and head north, turning east on the Main Branch right through the heart of the city,” says Sharon.

She suggests launching from the dock at kayaker-friendly Lawrence’s Fisheries and making the four-mile trip to the lock at the river mouth. Fried seafood fans can follow up with a plate (or paper bag) of Lawrence’s famously crispy fish and shrimp.

Start as above on the Chicago River, but proceed through the lock when you reach the lake. Paddle out to the end of Navy Pier, admiring its century-old amusement park, Crystal Gardens and phenomenal skyline views. Head south on Lake Michigan alongside the city’s world-renowned waterfront park system. Landing is permitted at select beaches during summer; pull ashore at 12th Street Beach (eight miles one-way) and grab a bite at tasty Del Campo Tacos. 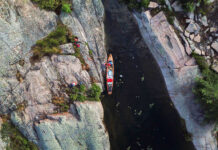