There are a lot of places on this continent where roads and rivers intersect. In fact, when you consider how many ways there are to get to a river with a car, it’s a wonder we’ve only come up with 26. We just picked 26 to show off our familiarity with the alphabet, so don’t be afraid to take a few detours along the way.

Line up the auto-boofing lip on this 18-footer, close your eyes and hope someone gets a photo.

“Ladies and gentlemen, this is the big one. Building, steepening, folding, crashing, frothing… bus eater is the kind of wave that is worth missing your wife’s birthday for. Not that I’m married. How many waves of this calibre have wave-side parking, eddy service and a chinese restaurant five minutes down the road?” – David Nieuwenhuis, national freestyle team member.

Downstream from Devil Lake, the Churchill splits into several channels as it drops about 12 metres, creating the best play area in Saskatchewan at Barker Lake. The multiple channels make up a 20-square-kilometre whitewater puzzle. Notable features include corner Rapids, Farside, Surf City, the Shelf and Mosquito Rapids (no irony intended).

Crooked Rapids on the Kaministiqua River is eight kilometres downriver from Dog Lake, so this clearly qualifies as our D-destination. As a 400-metre-long set, Crooked Rapids falls into the park and run category, with three play spots along the way. a minimum of 30 cms is recommended. The upstream hydro plant has a bottom-release gate, so the tannin-coloured water stays cold until mid-July.

This three-kilometre, class-III run right in the town of Grand Falls-Windsor starts with a technical pool and drop section before moving into the canyon and ending at Virgin Wave, as hard to get to as its name suggests. And don’t encourage any of the normally friendly locals to billyrag (abuse) you by being a bliving (shivering) angishore (weakling).

“The Folly is full of the different drops found in various parts of the country, all mashed into one river. It has great Quebec-style slides, and mini west coast vertical drops. Add that variety to its consistent gradient, easy access and lack of severe consequences and you have one of the best creek runs in the east.” – Kelsey Thompson, Truronian and the youngest member of Canada’s freestyle team last year. Put in at Folly Lake, 30 minutes west of Truro on Highway 104.

A huge hole (Lucifer’s Anus), a great wave (Haute Tension) and half a dozen other sets on a big, clean Quebec river. What more can you ask for? Plan your trip for the last weekend of August for the Upper Gatineau Whitewater Festival and witness the largest gaggle of open boaters with the distinct Québecoise penchant for going big. the run is an eight-kilometre stretch from below Maniwaki to above Bouchette, 130 kilometres north of Ottawa.

One of the proving grounds during the early 1990s emergence of freestyle and the site of the first world championships in 1993. The park and play wave under the bridge has changed a little over the years thanks to floods and people experimenting with heaving rocks into the river. It’s still a fairly retentive hole, though not as satanically punishing as the name might suggest.

The benchmark run around Revelstoke. If you can do it, stick around and see what else Revelstoke has to offer. This big-water creeking run is like Golden’s Kicking Horse on crack. The Illecillewaet is the river A.B. Rogers followed into the Selkirks in 1881 on his way to discovering rogers Pass and allowing the CPR to finish the trans-Canadian railway. Ten bucks says he swam at least once.

This limestone Banff classic is best in June, when the river, and the paved catwalks full of shutter-snapping tourists are full. How do you say “cheese” in Mandarine? Twenty five kilometres northwest of Banff on the Bow Valley Parkway.

Sixteen kilometres of river Hydro-Québec would like to get its hands on. Sixteen named rapids that you should be most pissed off to lose. Put in at Laniel and take out at Lake Temiskaming.

“I’ve heard there are boulders in the landing zone, but you’re fine if you just boof the hell out of it.” So says Canmore’s Logan Grayling of the roadside attraction at the eastern end of the crowsnest Pass. Successive runs are made easy by stairs intended for the tourists attracted by the sign on the highway. The 12-metre falls only offers a soft landing in high water years, but it may be the most fun you can have at a road-side rest stop.

At 16 hours north of Edmonton, the Slave River is a bit of a side trip, but the rewards are proportional. Imagine: 3,500 cms passing through a 60-square-kilometre labyrinth of islands under 24-hour sunshine. Four main sets—Cassette, Pelican, Mountain and Rapids of the Drowned— are each a separate day trip and are accessible on the only road from Fort Smith to abandoned Fort Fitzgerald. Molly’s Nipple is a titillating, smooth hump dropping into a horseshoe recirculation.

The Dries takes its name from the fact that an upstream diversion pipe leaves the riverbed dry anytime the flow is below 283 cms (10,000 cfs). But whenever the pipe reaches capacity, the Dries gets wet in a hurry. “These are big-water rapids, like the Ottawa at higher flows. It’s very continuous with huge waves and holes, and gnarly eddy fences,” says local and Wave Sport paddler Jimmy Blakeney who won the 2002 IR Big Gun Show on the massive Put-In Waves created by a 2001 flood. Ten minutes outside Fayetteville on Route 16.

“Hog’s trough and Elbow Falls are two of the finer rapids in Ontario. you could put them on the bottom Moose in New York and they’d fit right in,” boasts Thom Lambert, a guru of southern Ontario paddling. Levels around 15 cms make the Oxtongue the best place to run your first class IV and V. The rapids, with a long class III to IV section in between, are easy scouts, easy walks and easily accessed by Oxtongue Rapids Road, outside the west gate of Algonquin Provincial Park.

Day trip the section through town or park and play at the Catwalk and Golf Course play spots. Drive to the end of the road in Algonquin Provincial Park and hike up the rail grade for a creeky wilderness run upstream of Lake Travers.

Situated at the bottom of the Upper Black and the top of the Lower Black runs, the almost deserted hamlet of Queensborough enjoys a moment in the sun, sometimes rain, every spring as open boaters and kayakers come together from all over Southern Ontario for the Highway 7 creek runs on the Beaver, Black, Salmon and Skootamata.

Home of the Seven Sisters, “the best collection of class III to V drops in the lower Laurentians,” according to Mark Scriver, former OC freestyle world champion and designer for Esquif. On Highway 148 east of Ottawa, the put-in is off Chemin de la Riviere Rouge. A good run for tandem open canoes in the summer at 50 cms, more consequential at 500 cms in the spring. Watch out for Elizabeth—she doesn’t flush.

Reversing Falls appears and disappears where the Saint John River collides with the immense tides of the Bay of Fundy. The one-kilometre run down the main channel builds from flatwater to class IV on both high and low tides every day from mid-May to October. The rapids disappear when the river and ocean tide are at the same level. The best wave at low tide is named Greasy Chicken, after someone barfed up the Colonel’s best while surfing it. Viagara is a good ride when the tide is rising. Harold Cox, the manager of Canada’s freestyle team, recommends you stay at the Hilton: “Put in with the high tide and paddle back at low tide, going downstream both ways.”

While its reputation for being the hardest river in Quebec may be impossible to prove, the fact that this one-day run is so remote makes the taureau one of the most consequential. The 24-kilometre run has 20 constant kilometres of class IV to V drops, requiring an eight-kilometre overland hike if you get in over your head.

You’ll find the V-Wave about a kilometre downriver from the confluence of Callaghan Creek and the Cheakamus river on the three-kilometre class III Cal-Cheak, a run that holds water into the fall. Be sure to scout the take-out on river left below V-Wave and above the canyon. the canyon can be run at some levels, reports local paddler Braden Fandrich, and is a good place to collect boats that have been abandoned by swimmers who missed the take-out. Five minutes south of Whistler on Highway 99.

Safe, clean, warm, fast and big-volume, Whitemud Falls has three main waves. The should-be-famous Scary Wave is the river-left side of a five-metre-high breaking wave spanning the river. Whitemud is 90 minutes northeast of Winnipeg on highways 317 and 11.

This is the one that you know about and we don’t. It’s the one that isn’t 1,700 kilometres away, the one you know the levels to because you and your protective friends have a hidden gauge. Our river X is the Madawaska River and the best play spot is…

In the pre-plastic days, the Yough was considered one of the toughest rivers to paddle, not to mention pronounce. It’s still a classic run, with consistent class IV sets that punish floaters and reward technical boaters. Legend has it that Jeff Snyder used to stride the river (paddle it standing up) with his mother in the bow.

There’s a reason this set isn’t called S-Turn rapids like dozens of other sets you’ve no doubt paddled before arriving at Z (you were travelling in alphabetical order, weren’t you?). The current makes a severe left turn and slams directly into a severely undercut cliff. It’s one of the last surprises from a run that is three parts meandering class II, two parts continuous class IV and one part gruesome bedrock gorges. 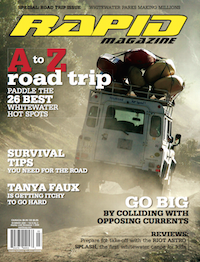 This article first appeared in the Summer 2006 issue of Rapid Magazine. For more great content, subscribe to Rapid’s print and digital editions here.