Seattle is synonymous with Puget Sound, a labyrinthine reach of the Salish Sea that defines the city’s geography and history. You could spend a lifetime exploring the arms, inlets, canals and islands of this vast estuary. Add to this Seattle and the Sound’s role as southern anchor of the Inside Passage coastal route to Alaska, and it’s little wonder the region lures paddlers from around the world.

Overlooked by many outsiders, however, is the city’s wealth of freshwater paddling possibilities. The largest of these, Lake Washington, borders Seattle to the east and offers an escape from the urban bustle with striking views of Unite the singular, icy hulk of Mount Rainier. Linking the lake to Puget Sound is the busy Lake Washington Ship Canal. Filled with freshwater thanks to the Ballard Locks, the canal makes a wide elbow at the foot of Capitol Hill, forming Union Lake. Kayak, paddleboard and canoe outfitters cluster here, launching tours into both lakes.

If You Want to go guided

Alki Kayak Tours (www.kayakalki.com) boasts postcard views of the Seattle skyline right from their lovely pebble beach. Two-hour and half-day ecotours visit the Alki Lighthouse and search for harbor seals, sea lions and bald eagles in the environs of Elliot Bay and the Duwamish River mouth.

For an overnight camping adventure, join them for a Puget Sound crossing to Blake Island State Park, where miles of beach and trails through madrona forest invite exploration.

Borrow a boat or board (or launch your own) from the kayak-filled docks at Agua Verde Paddle Club & Café (www.aguaverde.com/ ) on the Ship Canal’s Portage Bay. Tour Seattle’s vibrant houseboat community, drift through serene Washington Park Arboretum, and catch sweeping skyline views from Gasworks Park. When you return, grab a seat at the café’s waterfront deck and savor tasty Mexican cuisine and margaritas served up with a healthy portion of funky, lakeside ambiance.

If you Want to paddle into the sunset

With the sun flaming orange and pink atop the snowcapped peaks of the Olympic Mountains, sunsets on Puget Sound are divine.

Shilshole Bay is a fine spot for sunset paddles, or take a tour in Elliot Bay and gaze back at the Seattle skyline with its glass skyscrapers and the Space Needle reflecting gold against the mauve ridges of the Cascades.

Seattle is nicknamed “The Emerald City” because of its year-round greenery | Photo: Visit Seattle. Alabastro Photography 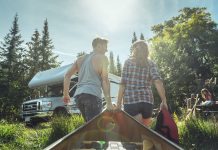 4 Best Places To Kayak With Whales