Oetz Trophy: A New Spin On A Classic Race (Video)

The Wellerbrücke is back on the map

The first annual Oetz Trophy extreme kayak race saw its debut in Tirol, Austria on October 31. The world’s best whitewater paddlers charged their way down the technical, class V rapids of the Wellerbrücke section of the Ötztaler Ache River, hoping to score the fastest time and earn the world champion title.

If this is the first time you’ve heard of Oetz Trophy, you’re probably not alone. The event is the very recent brainchild of the team at Source To Sea Kayak School in Innsbruck, Austria. The coaching staff consists of avid kayakers who spend long summers playing and teaching on their exciting home river in the Ötztal valley.

This valley isn’t a hidden gem, though. For years it was very much on the map for kayakers around the globe who came to know and love the river that played host to one of whitewater’s most prestigious events: Adidas Sick Line. So, when funding was pulled by the event’s title sponsors back in 2017, Sick Line’s sudden evaporation left a gaping hole in elite racers’ calendars.

“We quickly realized that if we wanted another race to happen on the Wellerbrücke, then we would have to organize it ourselves,” said a spokesperson at Source To Sea Kayak School. After some extensive brainstorming, numerous discussions with athletes and important players in the Ötztal, the small team of enthusiasts came together and the championship was reborn–with a new face.

Despite it being its inception year, household name kayakers still flocked in from around the world to battle for a spot on the Oetz Trophy podium. This year, Dane Jackson (USA) and Laura Hofberger (Germany) snagged the win in their respective categories and each claimed the title of Extreme Kayak World Champion for 2021. Click here for full 2021 results.

Organizers commented they wished to keep things simple in the race’s first year, but kayakers should expect to see some exciting changes for next year’s event. 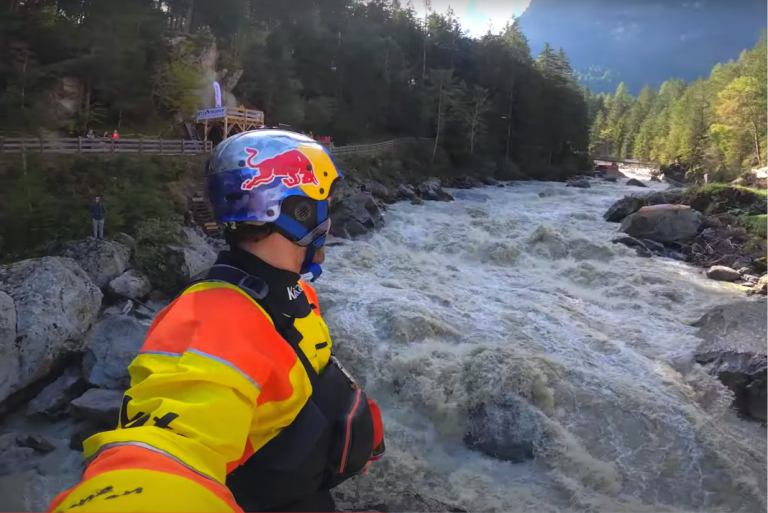 In the week leading up to the race, athletes were faced with stomping river flows and challenging conditions for practice laps.

In his most recent Youtube video, pro whitewater kayaker and race contender Dane Jackson explains how levels shot up from around 180 cubic meters (cms) to 270cms in an unexpected overnight rainstorm. By the time he was recording the video, levels had dropped down to a more manageable flow of 240cms—well, “manageable” if you’re Dane Jackson.

Dane grabbed his gear, headed to the river and began to scout the brown, burly rapids of the racecourse. He decided that the first hole was runnable, but the reward wasn’t worth the risk, so he put in just below it.

As we watch Dane battle the course’s big water, we can only imagine that we’re sharing the same feeling of nail-biting suspense as the onlookers peering over the river deck and down at the small (by comparison) kayaker below.

As is generally the norm with this world-renowned kayaker, he sticks his lines and hits his take-out eddy right where he needs to be. Taking a big exhale and big whoop at the finish eddy he had set himself.