My experience with Melker’s Ulvon began with rushing to pack for the weekend. I jammed random camping gear into plastic totes, those plastic totes into the back of my minivan, then edged into crawling rush-hour traffic. I arrived at the launch at dinnertime. Quick, load the kayak!

The Ulvon’s hatches easily swallowed my van-load of gear. On the water, I expected the loaded kayak to feel slow after highway driving. Not so! The Ulvon cruises at five knots. This is running speed, I thought. And just like that, I was in love.

I came to think of the Ulvon as the get-yer-move-on kayak. And I developed a theory as I paddled: short kayaks are not better for short trips—long and fast kayaks are. Ever drive into the city and notice how everyone picks up speed closer to their destinations? We’re less patient on short trips. When else but Friday on a weekend getaway do you want to be truly quick? Or have massive, 18-inch oval hatches and 230 liters of totally dry storage to cram everything in with nary a plan or a thought?

In Scandinavia, they must get this. That’s what Jason Yarrington observed. The co-owner of Trailhead Paddle Shack in Ottawa, Yarrington’s shop is the first to import Melker kayaks into North America. He discovered the Melker brand on a trip to northern Europe where he found the traditional sea kayaking scene alive and well. The paddle shops there sell full-size touring kayaks, suitable for the cold northern coasts where the plastic recreational kayak trend never took off.

“Europeans love their sea kayaks,” said Yarrington. “Their market is still evolving because that’s where people are using them.”

Melker is a Swedish company on the cutting edge of kayak design and environmental sustainability, playing with bio-based materials, like the Ulvon’s beautiful flax-fiber deck that looks like teak. The flax deck—the same plant we eat—is from Swiss producer BComp and used in skis and race cars. It’s strong and light and produces just a third the carbon emissions of fiberglass and boasts a zero-waste lifecycle.

Melker’s ultimate goal is to build a zero-impact kayak and it’s prototyping 3-D printed kayaks extruded by massive robots out of sawdust and cornstarch. That’s for tomorrow though; for today we have the Ulvon model, built in Estonia for a competitive price. Yarrington was impressed enough to import a container-load, likely the first of many.

Although capable of cruising fully loaded at four to five knots, the Ulvon is not categorically what’s known as an FSK—Fast Sea Kayak. It’s several inches shy of 18 feet. It doesn’t look exactly like a surf ski with a deck glued on, although it does have a voluminous bow for catching waves on downwind runs.

[ Plan your next kayaking adventure with the Paddling Trip Guide ]

There’s no plumb bow or racing kayak’s torpedo-shaped hull. Acclaimed Swedish industrial designer Magnus de Brito has gone to that edge and beyond with kayaks (he’s also crafted Porsches), creating the Point 65 XP18 and Freya (both true FSKs) as well as a speedy surf ski, the Bourbon Orca, with an idiosyncratic backward-sloping bow styled and named after a Norwegian offshore supply ship.

Penduluming in the other direction, de Brito has designed modular rec kayaks that break down to fit in the trunks of cars. The prolific designer’s collaboration on the Melker Ulvon marks his homage to sea kayak tradition and a reversion to the mean, and a golden one at that: a true do-everything kayak with majestic, atavistic appeal.

The Ulvon HV deftly blends the long waterline, minimal rocker and sleek dimensions of a speed-centric kayak with a more play-oriented shallow-V hull and semi-hard chines. Loaded, it behaves as an expedition kayak should, very stable, comfortable and predictable.

a serious expedition kayak with a playful character

On our first night together, it was pleasingly unremarkable—aside from the speed. Nothing niggled, nothing jabbed. The hatches were completely dry and easy to click on and off. The rudder deployed effortlessly—oh, and there’s a skeg

too. That’s a Scandinavian thing, apparently, to have both. “I won’t have any arguments from anybody,” joked Yarrington.

Using it on an overnight trip, I was amazed by the Ulvon’s stability and capacity. The HV stands for High Volume. There’s also an Ulvon LV (low volume) which is a fully scaled-down design, not just chopped off from the same mold. It looks a bit like a yacht or an aircraft carrier from the cockpit because the deck doesn’t taper as quickly as most sea kayaks and the widest point of the cross-section is at the deck’s edge—so the paddler doesn’t see where the hull meets the water. That shape makes it capacious, but nimbler in the water than its stately appearance suggests. Paddling it is a continual surprise—at every moment you’re traveling faster than you feel you should be.

Despite the get-yer-move-on’s load-carrying capacity, paddling it empty revealed a completely different soul: light, playful and maneuverable. It’s easy to tilt onto the chine to shorten the waterline and carve a quick turn. Yarrington reports his pals enjoy surfing the Ulvon and the Greenland set likes how it rolls too, although the LV might be more suitable. The HV rolled easily both empty and loaded, but I found the rear deck too high for any fancy layback rolls.

The factYarrington recommends the Ulvon for surf play and rock-gardening while it got me dreaming of a Seattle-to-Juneau trek reveals its true versatility. Melker’s website describes it spot-on: a “serious expedition kayak with a playful character.” The Ulvon can be interpreted however you like, depending on your mood.

Perfect for surf play and rock gardening, or paddling from Seattle to Juneau.| Photo: Wyatt Michalek 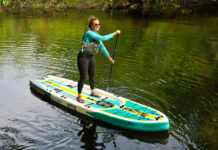