Nothing holds the promise of adventure quite like a warm summer’s night—especially when you’re camping. Looking to make your next family camping trip truly unforgettable? Before settling down around the campfire to share scary stories and roasted marshmallows, try one of these fun and unique after-dark activities.

1 Go for a night paddle

Wait for a calm, clear evening to enjoy the memorable magic of a quiet night paddle. Gliding through the seamless union of water and sky and piercing the hearts of constellations twinkling on the still surface transforms your Evergreen Starburst into the Starship Enterprise and its occupants into intergalactic explorers.

On Thursday evenings in August, park interpreters at Algonquin Provincial Park lead public wolf howls from the park’s Highway 60 corridor. The spine-tingling canine chorus frequently attracts up to 2,000 park visitors at a time. Success is by no means guaranteed, but wolves have been heard on 88 per cent of the outings held over the past two decades.

Check the park website or bulletin boards to confirm that the wolf pack has been located and the howl is a go, then join the hundreds of other vehicles lining the highway and listen quietly while park naturalists deliver imitation wolf howls and wait for a response from the dark woods.

3 Swim in a bioluminescent sea

Imagine plunging into an ocean where every break of a wave or flutter kick of a swimmer’s feet sets the ocean ablaze. The otherworldly glow isn’t harmful; it’s merely the biological response of billions of microscopic plankton agitated by the disturbance. Bioluminescent dinoflagellates occur in all the world’s oceans, but you’ll only see them when sea temperature and nutrient availability combine to spawn high concentrations of the tiny creatures.

[ Read more: 5 Of The Best Places In The World To Go Bioluminescent Kayaking ]

Fireflies, or lightning bugs, are better known vessels of bioluminescence for most landlubbers. These members of the beetle family prefer wet, wooded areas and use their talent to attract mates and prey. Burn off pre-bedtime energy by arming your family with butterfly nets and seeing who can catch and release the most fireflies. If chasing these elusive, dying-ember-on-the-wind sparks doesn’t tire everyone out, it’s probably time to cut back on their s’mores intake (see below).

[ Plan your next family canoeing adventure with the Paddling Trip Guide ]

A contraction of the words “some” and “more”—as in “gimme s’more”—the first printed record of this gooey, campfire treat appears in the 1927 Girl Scouts manual. While every camping family has almost certainly sampled the classic s’more, a roasted-to-perfection marshmallow sandwiched with a piece of chocolate between two graham crackers, we invite you to get creative.

Try, for example, the Fire Ban S’more, which is marshmallow spread and Nutella on graham squares. Or, for the ultimate delicacy, the Hedgehog S’more. For this cute one, roll your campfire-toasted marshmallow in M&M candies before placing between graham cookies. Mom and Dad can dip their hedgehog ‘mallows in Bailey’s before toasting. Yum.

This year, the most dramatic astronomical display is slated for mid-August when the Perseids meteor shower—considered by many to be the best annual shower visible from the northern hemisphere— enlivens the night sky with countless (at up to 50 meteors per hour, you’ll literally lose count) falling stars. Shooting or falling stars are actually debris from comets that enter our atmosphere and vaporize due to friction with the air.

The Perseids is one of nearly a dozen annual intersections between Earth’s orbit and cometary orbits’ meteor streams. For the best show, you’ll have to stay up after midnight on the night of August 12th and get far enough from any cities to enjoy a dark night sky. Find more meteor showers at EarthSky’s meteor shower guide.

Many frogs are most vocal from dusk until after dark. Each species has a unique call—used to attract a mate, mark territory, presage rain or sound alarm—but some are more distinctive than others. As wetlands thaw in the warm sunshine, spring peepers kick off the chorus in March–May (depending on latitude) with their cheerful, onomatopoeic peeping, wood and chorus frogs begin “ribbit”-ing soon after, and the American bullfrog joins the choir with its deeper croak, “jug o’ rum,” in June and July.

Stroll the floating boardwalk after twilight in Presqu’ile Provincial Park on Lake Ontario to listen to the frogs’ sonorous refrain resound up to a mile across the still wetlands. Become an Ontario Frogwatch volunteer and listen to frog calls by province. And no, Dad, none of them say “Bud-weis-er.” 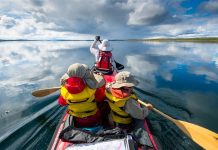 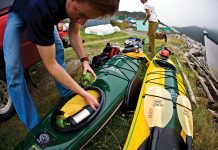 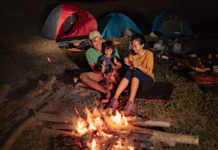 7 After-Dark Activities For Your Next Family Camping Trip 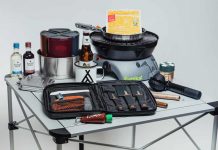 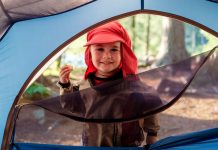 Canoe Camping With Kids: 7 Tips To Survive And Thrive