The first time I attempted a canoe-borne romantic escapade was shortly before an article I wrote on making love in canoes hit the newsstands. The article covered all the bases—but I had yet to do actual primary research.

I was okay with this. It was my wife, Alana, who wasn’t going to stand for it. She believed journalistic integrity demanded that we make love in a canoe. Alana left me to figure out the details while she put our three-year-old daughter to bed.

Getting out on the water was going to be impossible. We live in the middle of a city and didn’t have a babysitter. At first I thought a quick (though not that quick) solution would be to just flip the canoe over on the back lawn. But I worried the set-up would lack romantic quality. Instead, I put the 16-foot boat through our back window, rested it beside our fireplace, placed two glasses of wine on the bow seat and put a CD of nature sounds in the stereo.

The mood was set. I sat in the stern, wearing only my bathrobe, and waited for Alana to return for the big surprise. Before long she did, but with our daughter in her arms. Kyla had a slight fever and needed comforting before going to bed.

There was no getting around the embarrassment, but Kyla saved me by asking if we were going camping. I spent the next hour playing camp-out with Kyla and her dolls.

So there I was, still a canoe virgin and, according to Alana, also a complete idiot for hauling a canoe into the house and thinking she’d be up for a romantic encounter in a boat resting on a shag carpet. The good news is my daughter thinks I’m the coolest dad ever for bringing in extra props for her dollhouse. She cried the next morning when I took the canoe back outside. So did I.

The problem was, I had to write another piece about making love in a canoe for my next book. And the publisher wanted photos.

I decided to buy a blow-up doll. I went to a joke gift shop and, since I had Kyla with me and the inflatable dolls were on display in the back near some rude sex toys, I asked the sales clerk to retrieve one for me. As she went to fetch it a woman from Kyla’s daycare wandered into the store. When the woman stopped to say hello, the clerk yelled out, “Which model do you want?”

I panicked and blurted out, “The cheapest one.”

“The androgynous one it is, then,” came the reply.

I slinked out of the store with my doll double-bagged, hoping to never see the woman from Kyla’s daycare again, and wondering how I would photograph a moment of passion involving an inflatable hermaphroditic canoeist.

For better or for worse I’m still a canoe virgin, but I was lucky enough to have a neighbour who really wanted to help me out of a tight spot. If that’s not why he offered to pose for me then I don’t want to know the real reason.

Kevin Callan does not recommend inflatable dolls as a substitute for a proper PFD. 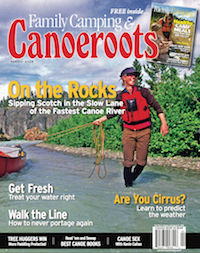 This article first appeared in the Summer 2008 issue of Canoeroots Magazine. For more great content, subscribe to Canoeroots’ print and digital editions here.