When Mike Ranta dreams, he dreams big. During the past year, the two-time cross-Canada canoeist has been building the world’s biggest canoe paddle.

He calls it the Big Dipper.

“I was aiming for 100 feet, and then I threw on an extra 10 or so,” Ranta says of the 110-foot-long, 15-foot-tall paddle he’s building in the tiny town of Killarney, Ontario. Originally from Atikokan, Ontario, expedition paddler Ranta spent hundreds of hours building in 2019—except for a six-week hiatus in the summer to paddle from Fort McMurray, Alberta, to Yellowknife, Northwest Territories.

To create the paddle, Ranta sawed and fastened 350 boards and beams to build sections of the paddle that were later fastened together. He estimates he used more than 1,000 bolts and five gallons of Titebond glue. Once complete, he expects the Big Dipper will weigh more than three tons. The paddle is now partially assembled, with shaft and blade together. Ranta notes he was only out by about a quarter of an inch in his measurements—pretty impressive for an amateur woodworking paddle maker on a project of this size.

To complicate the build, Ranta left a hollow down the butt end of the paddle and into the shaft to create a time capsule that will be sealed for 200 years. “I tell people to put something in there the size of their heart,” explains Ranta. The capsule is currently open for submissions (thebigdipper.ca).

The idea for the paddle started to carve its way into Ranta’s mind nearly 15 years ago, but he struggled to find a town and purpose where the monolith could exist. When Ranta arrived in Killarney, Ontario, on the shore of Georgian Bay, during his third attempt at crossing Canada by canoe, it all clicked. When Killarney was founded in 1820, it was known as Shebahonaning, meaning safe canoe passage.

Once complete, the paddle will adorn a small bluff along Georgian’s Bay beautiful rocky coast, set in front of Killarney Mountain Lodge’s newly constructed log convention center—also the largest of its kind in the world. The Big Dipper’s unveiling will celebrate the town’s 200th anniversary and add to its reputation as a premier canoeing destination.

“It wasn’t a Dragon’s Den moment by any means,” says Ranta about his agreement with Holden Rhodes, the owner of Killarney Mountain Lodge resort. “I was like, ‘Hey man, want to build the world’s biggest paddle?’ and the rest is history.”

“You’ll be able to see it from the lodge, from the lake, maybe even from space,” adds Ranta.

The project hasn’t come without learning curves. The biggest issue for Ranta has been his allergy to cedar dust, a serious problem when sanding a 110-foot-long cedar canoe paddle. The paddle was also nearly ruined during a late October storm when the wind blew the shaft off oversized sawhorses. Luckily, there were no injuries to person or paddle.

In many ways, the project is not so different than Ranta’s massive canoe trips, with similar endurance and commitment needed. “When you first start, it’s hard to see the end,” he says. “Some people can’t fathom something that will take a year to complete.”

The Big Dipper will be sanded, stained and erected in time for the Canada Day weekend celebrations scheduled for July 2020. “Everyone is invited,” says Ranta.

Writer David Jackson paddled alongside Mike Ranta from the coast of British Columbia to Killarney, Ontario, in 2017. 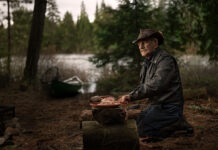 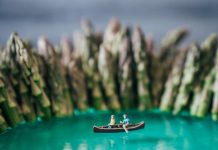 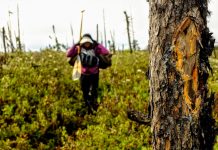 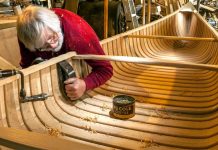 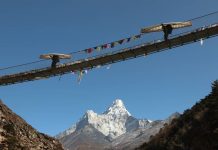