New kayaking film Chasing Niagara follows Rafa Ortiz on a multi-year journey as he works towards dropping Niagara Falls. The Red Bull Media House and River Roots film is directed by Rush Sturges and trails a crew of talented paddlers around the world with Ortiz as he trains, prepares and balances the risk involved in what would be a revolutionary feat in the kayaking world. The film is beautifully shot and features endless footage of kayakers at the top of their game, but it is also put together in a way that emphasizes the rich story and plot of Ortiz’s quest.

Ortiz spoke with us from Mexico about what sparked the idea, how the process consumed his life for a number of years, and how he went about telling his mom and dad he wanted to kayak Niagara Falls.

The idea to kayak Niagara Falls is planted

About five years ago Ortiz was in Canada and heard from a friend who had recently been at Niagara Falls that there was a potentially runnable line. He was heading back to Mexico soon but decided before he left he needed to see it for himself. Ortiz drove through the night with a few friends, slept in the parking lot and viewed the falls in the first morning light. He ended up getting in touch with Rush Sturges, and the two looked at the falls together. Within a matter of weeks Ortiz had gone from realizing the run was possible to deciding it was something he wanted to go for.

When Ortiz began running waterfalls as an 18-year-old, people would always ask, “What about Niagara Falls?” He explains there is recognition of Niagara that is different than other big falls, and that the name alone conveys so much, including the history of suicides and barrelers plummeting over the falls. He says sometimes when he mentioned his plans to people he would receive more negative reactions than when he spoke about other massive waterfalls he had conquered, like Mexico’s Big Banana.

Telling your parents you want to kayak Niagara Falls

Both of Ortiz’s parents are extremely supportive of his kayaking career and ambition, but he often tends to communicate his plans to run something huge to his father before the fact, and to his mother after. “The very day that I called off the whole project, I think an hour later I called my mom and was like, ‘Mom, I don’t know if you know, but I’ve been planning to run Niagara Falls for the past few years and I just cancelled the whole project.” She told him she actually knew he was up to something big, she just hadn’t known exactly what.

A constantly changing perception of risk

Ortiz sees risk as a big part of this segment of the kayaking world that involves running big waterfalls and tackling challenging class V rapids. As a teenager he knew in the back of his mind that there was always the possibility of drowning or serious injury, but it just never seemed it could become a reality. As he gets older and has more experiences on the river, the more his perception of the risk involved changes and develops. He says he now sees the risks in a more realistic light than he once did. “That realism is what comes with a little more maturity and a little more experience like that.” 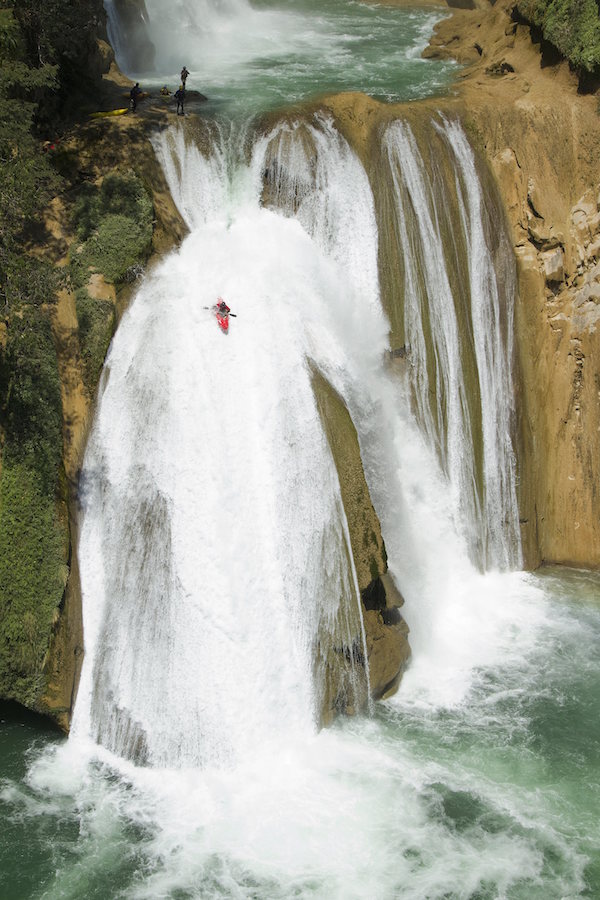 Motivation and the decision to walk away from Niagara Falls

Out of an incredibly long and often tumultuous multi-year journey, one of the things Ortiz is most proud of is maintaining his motivation. He says for the most intense two years leading up to the event, there was not a single day he wasn’t thinking about his goal, to the point where the mission became all-consuming. “It was haunting, it was daunting, it was dark. I was going pretty insane. I was obsessed with it,” he says. He explains that despite his last-minute deep feelings that something didn’t feel right, in a way it would have been much easier to just run it. “Maybe the thing I’m most proud of in the end is walking away, after three years of dedication.”

So how does one of kayaking’s greatest athletes define success for himself? “Being able to live from kayaking, that’s probably my biggest success right now that I’m most stoked about. I’m a city boy, and I’m doing something right now that’s so far from what I was taught when I was young.” He also sees success in the ability to be transcendental in his sport. “I feel like if we have the chance to be up there we also have a responsibility to change the sport, to push it somehow and set new standards.”

Chasing Niagara is in select theatres this summer, available on iTunes July 1 and On Demand July 19.