Sébastien Lapierre and Olivier Giasson were new to sea kayak expeditions when they launched their tandem into the Arctic Ocean in July 2013. The Quebec firefighters were attempting to be the first to complete a single-season transit of the legendary Northwest Passage by sea kayak, 3,500 kilometers from Tuktoyaktuk, Northwest Territories, to Igloolik, Nunavut. We caught up with Lapierre, 35, to learn how they fared on an audacious, 80-day expedition that was appropriately billed Rêve de Glace—Ice Dreams.

WHERE did the name of the expedition come from?

We did a 30-day ski expedition in Greenland in 2010 and fell in love with the Arctic. We were living our dreams up there and we really wanted to return. At home we started hearing a lot about the Northwest Passage in the news—about global warming and less ice coverage. We realized maybe one day all we’ll be able to do is dream about icebergs. So I started researching a trip. Why not do the whole thing in a kayak? After three years of planning we were ready to go.

WHO made the call to take a tandem?

We both thought it was the right move. The main factor was that it’s more efficient to paddle a tandem than to both paddle solo kayaks. On the other hand, we had less storage space. But with a tandem one of us could be eating while the other paddled so we didn’t have to stop for rests. In the end, we made it further than all of the others who were also up there last year trying to do the Northwest Passage in rowboats. A kayak handles much better in the wind.

WHEN did you realize you weren’t going to make it?

We picked the coldest summer in 20 years and the ice was a real challenge. Had we done the trip a year earlier we probably wouldn’t have encountered any ice. We still pushed it to the maximum and made 2,800 kilometers in 60 days. It was disappointing because we were two days ahead of schedule and we had time to make it, but there was no way we could’ve continued on from Gjoa Haven [Nunavut] because of the ice. We knew this could happen before we started. Sometimes you have to be humble and say maybe next time.

WHY do you love the Arctic?

It’s something about the cold; you just feel alive up there. The landscape is so magnificent and the light is different: A sunny day in the North is different from a sunny day in the south. The North has always been a magnet for me and now that I’ve tasted it, I know all my future projects will be close to the poles. 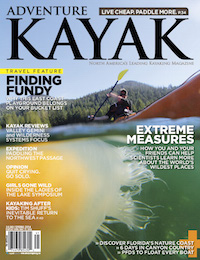 This article first appeared in Adventure Kayak, Spring 2014. Read it here, or download our free iPad/iPhone/iPod Touch App or Android App to view the issue on your tablet or smartphone.