The summer of 2009 marks 100 years since the inception of one of the canoeing world’s largest protected areas. When Quetico became an Ontario forest reserve in 1909 and then a provincial park in 1913, a paddler’s paradise was born.

It’s a place you can exercise your eyes on cascading waterfalls, reflective tannin lakes and stands of old-growth forest; spend calm evenings lying on a rock listening to loons call; pick marble-sized wild blueberries for morning pancakes; and take on a challenging portage to some remote lake full of feisty fish.

There’s no better way to celebrate the centennial than to paddle the renowned Hunter Island route. This is where it all began. It was the “island” area that was first protected in 1909.

It’s not really a true island. The Hunter Island area is a chunk of land and lakes that split the two historically significant fur-trade routes, Kaministiquia and Grand Portage. The route is chock-full of history and has far more water to paddle than trails to portage. And with Quetico being a border park, you can get to it either at the north end from Atikokan, Ontario, or from Ely, Minnesota and through the Boundary Waters Canoe Area to the south.

The 200-kilometre circuit takes 12 to 14 days to complete, though it’s possible to slice and dice the circuit to leave you with different trips of five or seven days. If you are in a hurry, have a go at the annual Hunter Island Canoe Race and try to break the speed record. The current record, set in 1994, is just under 29 hours.

But you’re best not to rush the trip. Hunter Island has too many natural and historic treasures along the way. Paddling this route you will pass: the place where Bill Mason starred in his first film, a portion of David Thompson’s survey route of Canada, the route of the militia heading to engage Louis Riel during the Red River Rebellion, the place where the infamous John Tanner was shot, a portion of pioneering conservationist Aldo Leopold’s favorite canoe trip, significant native pictograph sites and Warrior Hill, where young Ojibway braves raced to the top to test their worth as warriors. 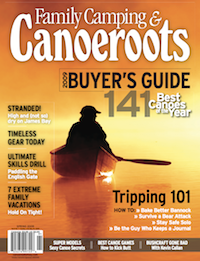 This article first appeared in the Spring 2009 issue of Canoeroots Magazine.