As many great adventures do, the idea to cross the Bass Strait first came up after a few beers. They would do it in a blow-up boat, joked Ollie Roffey to his mate Joe McNamara.

So, when another friend, Trevor Potts, later approached Roffey with a similar idea—again, at the pub—he had only one response. “I just started laughing,” recalls Roffey.

Simon Moroney had a similar reaction when the proposal made its way to him. “I thought, ‘we’ll die,’” he says.

[ See also: Survive Anything On Your Next Paddling Trip ]

Moroney’s fears were justified. The Bass Strait has a fearsome reputation as “the Everest of the Sea.” Stretching for about 330 kilometers from mainland Australia to Tasmania, it’s known for its volatile weather, fast tidal currents, and a shallow sea shelf that generates steep waves.

Roughly 20 to 30 experienced kayakers make the crossing each year, usually by island hopping along the Strait’s eastern side. But while the foursome—all triathletes—could swim for 15 kilometers with ease, none had ever kayaked even close to the 70 kilometers through open water required of them. What’s more, they wanted to do the expedition in just six months’ time.

In the sober light of day, Roffey, McNamara, Potts and Moroney started approaching outfitters for support. None would help. Crossing the Strait, they were told, was a three-year project. But they only needed one to say yes.

[ Plan your next kayaking expedition with the Paddling Trip Guide ]

“To have a whole group composed of real rookies is something you don’t see very often,” says Rob Mercer, a sea kayaking coach and co-owner of Expedition Kayaks, who helps half a dozen groups make the crossing every year. Mercer was won over by the group’s athleticism, diligence to train and the questions they asked.

“There was an understanding they were doing something pretty cheeky,” says Mercer.

With some expert help, training begins in earnest

With the help of Expedition Kayaks, who also outfitted them for the trip using its own line of sail-equipped sea kayaks, the men spent six months training intensively with local experts. They practiced paddling in tailwinds and headwinds, and navigating and reading the weather and tidal currents. More importantly, they learned when to let judgment—rather than the quest for adventure—prevail. This was driven home at weekly training sessions, including paddling 20 kilometers straight out to sea and back again.

None of the conditions near the group’s training grounds in Sydney could fully prepare them for the ferocity of the Strait’s tidal flows, though. On the second day of the expedition, the group was eight hours in when the island they were heading for disappeared, obscured by dark clouds and a growing swell.

“There were whitecaps coming from everywhere,” says Moroney. “I thought to myself, ‘If this is how the rest of this trip is going, we’re in a lot of trouble.’”

What carried them through, he says, was newfound respect for the weather and clear communication. They were no longer individual athletes competing in a triathlon—they were a team.

Looking back, Roffey says he wouldn’t have done it any other way: “It wasn’t just about the two weeks in the water. The six-month build-up and intense learning was part of what made it. That was an adventure in itself,” he says.

[ See also: 7 Ways To Find More Adventure In Your Life ]

So, now that they’ve done the unthinkable—can they call themselves kayakers?

“No. No way. I have a newfound respect for kayakers,” says Moroney. “We just turned up, fell out and got back in.”

They had six months to prepare for the Everest of the Sea—330 kilometers from mainland Australia to Tasmania. | Feature photo: Nick Moir/The Sydney Morning Herald 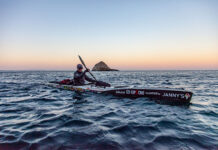