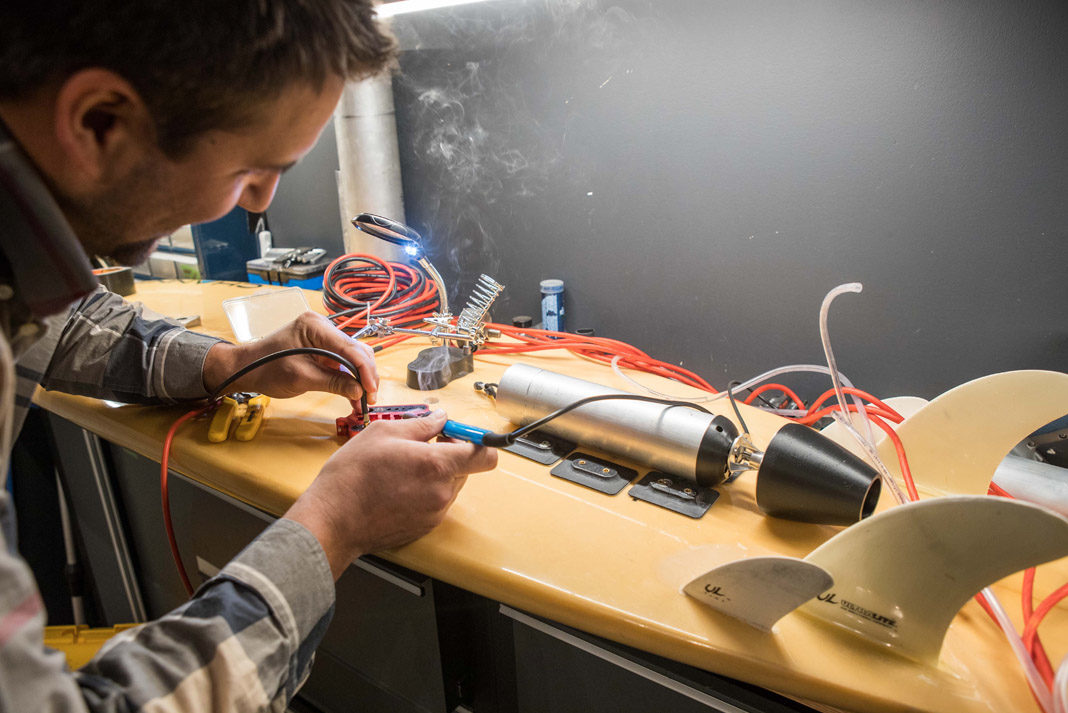 Turn Your Next Paddleboarding Excursion Into A High-Speed Adventure. This is the promise Collingwood, Ontario, local Chris Vermeulen is making to his customers with his new invention VeFoil, a bolt-on jet propulsion system for surf and paddleboards.

Vermeulen has always been a tinkerer. As a kid he built a dirt bike, a go-cart and remote-controlled airplanes. Now 37 years old, his latest creation is set to take the e-surf world by storm. His successful Kickstarter campaign raised more than $2,000 in the first 36 hours. And now, with 100 backers, he’s raised more than $7,000. One look at his project and it’s easy to see why he’s succeeding;

Vermeulen Is Creating Something Anyone Who Has Ever Stood On A Surf Or Paddleboard Has Only Dreamed Of. I want to create a propulsion system, which will attach to the bottom of any SUP and any surfboard, with a bracket system so you can bolt it on to any hydrofoil,” says Vermeulen. “It’s a remote control jet drive.

His prototype features a 12-horsepower motor powered by LiPo batteries, though the production model uses lithium ion batteries. Among the numerous hurdles while bringing his dream to fruition has been the controller—no company was manufacturing a decent waterproof remote control to throttle up or down engine speed.

Working alongside an ever-growing team of local tinkerers and paddlers, including Ian Brown, Simon Fischer, Pedro Monsalve and Miles Hammond, they solved this problem by designing and beginning to manufacture the first commercial, floating, waterproof trigger-style remote. It’s a piece of kit the e-surf world is excited about and may turn out to be the most successful part of Vermeulen’s venture.

Since the entire kit can mount to just about anything, top speeds of the finished product will differ. Vermeulen believes the top speed of a paddleboard with the VeFoil will be about 30 miles an hour and the battery will last 30 to 60 minutes, depending on what it’s mounted to.

Vermeulen created his jet drive to catch the surf

One Of Vermeulen’s Big Gripes With E-Surf Boards Is You Can Never Truly Catch A Wave With Them.

“When you catch a wave with an electric board, unless you throttle the board perfectly, you’re either falling back off the wave from the propeller resistance, or you’re shooting in front of the wave,” he says. So he designed a system when the throttle is off, the nozzle will close. Allowing you to catch a wave with the motor, shut the motor down, surf the wave, then power up to get out of the wave.

As a DIY kind of guy, Vermeulen’s final product will be a bolt-on kit retailing for about a tenth of what a full production model, like competitor Lift eFoil, is going for.

The whole plan we’re working on is to try to build it with stock parts,” he says. “We order bulk motors, bulk computer systems, get everything pre-programmed with all our settings, we’ll put on special plugs, so it’s plug and play. It’s a DIY kit. I’ll put the kits together and say, here they all are, here’s the instructions, here’s the video clip. Bolt it together, plug in the battery and you can transform any of your rides.

“We’re hoping it’ll retail for about $1,750 USD,” says Vermeulen. “That’s the goal, but we won’t know until we’re totally done.” Final testing is ongoing, with the entire kit available for shipping late this summer.