June is Canada’s National Indigenous History Month and Ojibway artist Patrick Hunter (patrickhunter.ca) is marking this year’s event with the launch of a first time ever collection of artisan canoe paddles.

Patrick Hunter is a 2 Spirit Ojibway artist best known for his paintings in the Woodland Art style who is also making a name for himself in the corporate world through collaborations with RBC and BMO Banks, Ernst & Young, West Elm, Staples, eBay, CTV and the Chicago Blackhawks to name a few.

“There’s an Indigenous story of people, culture and rich history that I’m trying to share with Canadians through my art” says Hunter as inspiration for his work. Watch Video Interview.

Hunter was approached by Canada Canoe Paddles, a Toronto based company that partners with iconic Canadian brands like the CBC, The Tragically Hip and the Hudson’s Bay Company to create artisanal canoe paddles for display in cottages, cabins, homes and offices. “It is commonly acknowledged that Canadians are born with a paddle in their hands” remarks company founder Mario Zeskoski and even our late Prime Minister Pierre Trudeau identified its special role when he noted “paddling a canoe is a source of enrichment and inner renewal.”

“Working with Patrick on an Indigenous paddle series seemed like the perfect way to showcase his work and provide Canadians with a unique artistic expression of the native lands we all call home” says Zeskoski. The canoe paddle became Hunter’s canvas upon which his art would would come to life.

The art collaboration will consist of four canoe paddle designs featuring Canadian themes done in Hunter’s Woodland Art style. “When I paint, I look into my subject matter to not only see its inner composition but also its spiritual side” says Hunter who was inspired by viewing original works of painter Norval Morrisseau in his hometown of Red Lake.

The paddles will be sold as a limited edition series individually numbered from 1 to 300. “Once they’re sold, they’re gone” says Zeskoski, “making them a special addition to anyone’s cottage or home whether you’re a paddler, outdoor enthusiast or someone who just appreciates the beauty of Canada’s wilderness as seen through a different lens”.

A portion of the proceeds will go to Hunter’s workshop initiative where he provides new generations the confidence they need to pick up a paintbrush. “Seeing how people react to what I create brings me the greatest joy and drives me to continue growing as an artist and a voice for Indigenous culture” says Hunter. “I look forward to making new acquaintances through my art as I continue on my creative journey”. 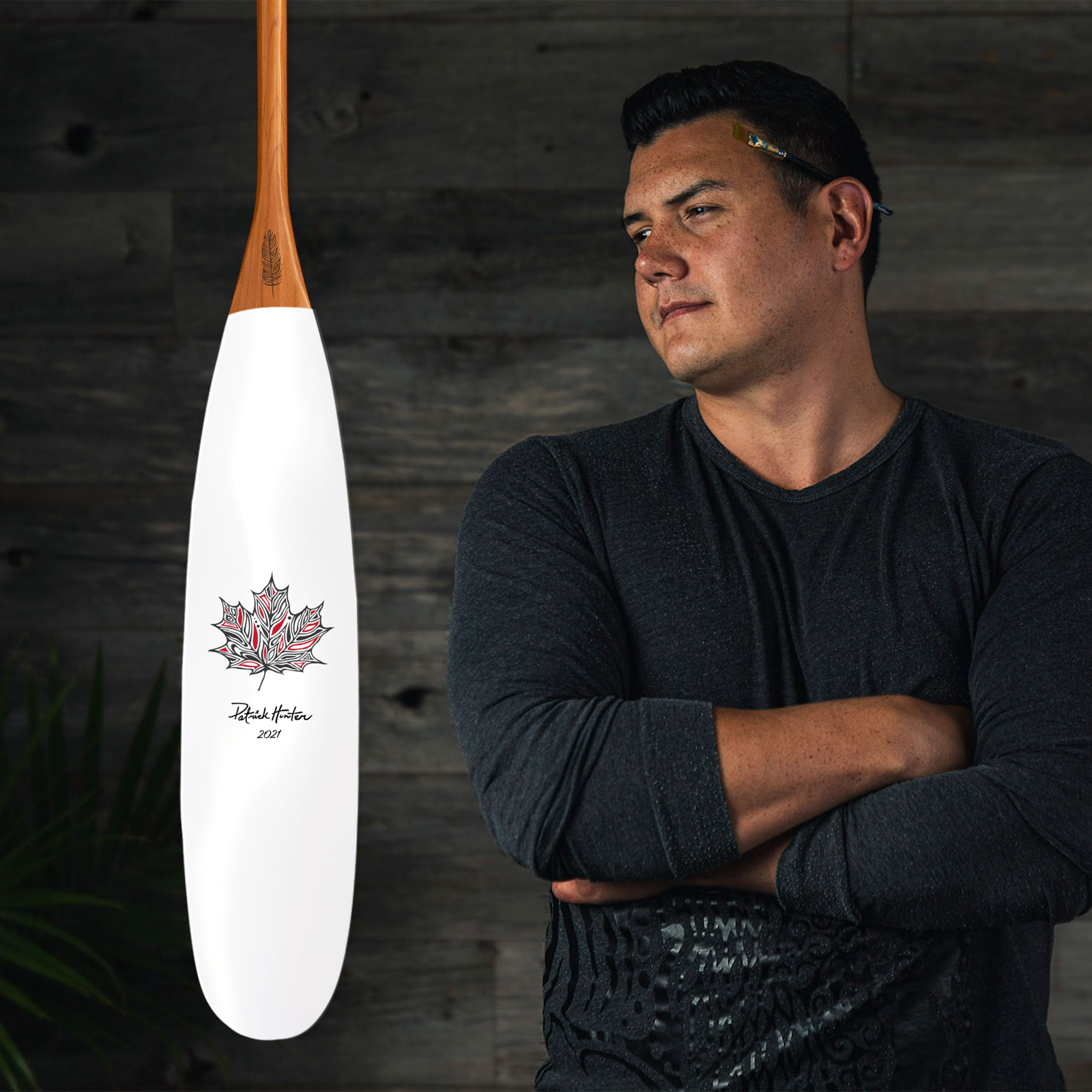 Canada Canoe Paddles is a Toronto-based company (est. 2021) that was borne out of the desire to celebrate the canoe paddle’s storied past and the special place that it holds for Canadians. Whether going to camp as a kid, family outings in provincial parks or more ambitious portage trips, the trusty canoe paddle was always there. The association with other iconic Canadian brands and imagery was a way to elevate the canoe paddle from a means of propulsion to a decorative artform to adorn the walls of cottages, cabins, homes and offices.

“With the pandemic, people have not been able to travel, go camping or get to their out of city retreats so the canoe paddle represented a bit of a pick me up boost and visual reminder that outdoor adventure would soon make a return” says Canada Canoe Paddle founder Zeskoski.

Canada Canoe Paddles first collaboration in 2021 was with The Tragically Hip that comprised two paddle designs. A Limited Edition series consisting of 300 paddles sold out in just 34 hours. A Legacy paddle design is still available and continues to get picked up online by The Hip fans as well as Canadian music enthusiasts.

The partnership with Patrick Hunter is the latest Canada Canoe Paddle venture that utilizes the artist’s Indigenous drawings on a limited series collection. “We are grateful for the opportunity to play a role in Patrick’s artistic journey and help raise awareness of Indigenous culture in Canada” says Zeskoski.

Canada Canoe Paddles will continue looking to work with other brands, corporations and individuals for whom the noble canoe paddle is synonymous with ties to Canada, the outdoors and the indomitable spirit of adventure. To learn more, visit https://paddlepromotions.ca. 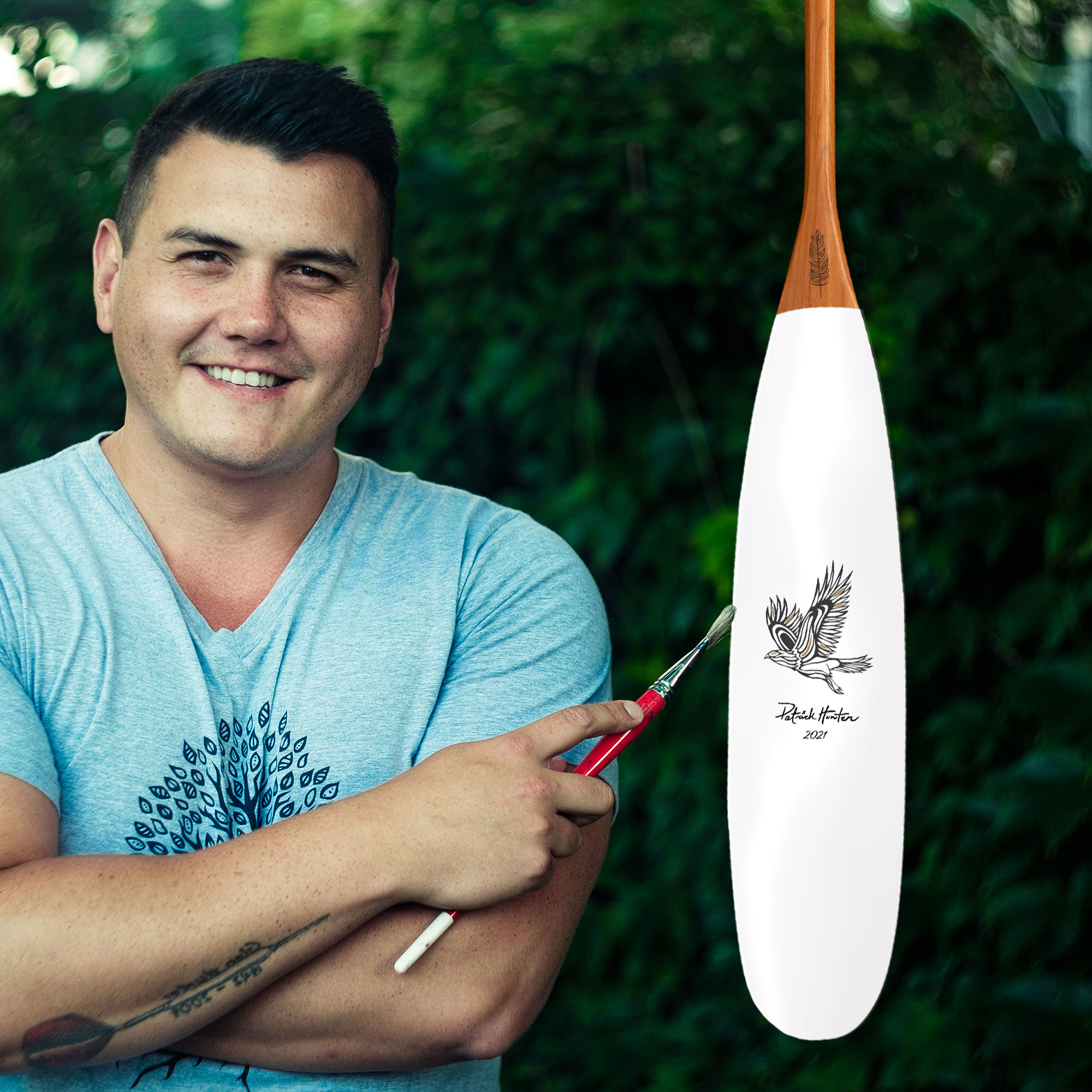 Patrick Hunter is a 2 Spirit Ojibway artist best known for his paintings in the Woodland Art style who is also making a name for himself in the corporate world through collaborations with RBC and BMO Banks, Ernst & Young, West Elm, Staples, eBay, CTV and the Chicago Blackhawks to name a few. “There’s an Indigenous story of people, culture and rich history that I’m trying to share with Canadians through my art” says Hunter as inspiration for his work.

Hunter’s introduction to the Woodland Art form began in his community of Red Lake, ON in high school. “Indigenous works were just so celebrated in my community and everywhere you looked. When I learned what the symbolism was, I felt more connected to my culture and that maybe it would be something I could one day be good at”.

In 2007, Hunter assisted in the early development of Shingwauk University in Sault Ste. Marie, ON, the first accredited University from a First Nations worldview. In 2008, Hunter attended Sault College where he flourished in the 3-year graphic design program. Hunter found his fit and embraced a two-term role as the President of the Indigenous Students Council which provided programming and advocacy for Indigenous students at the college.

Hunter made the move to Toronto in 2011 to begin a career as a graphic designer. Here he began to find his calling and fully commit to the kind of art he wanted to create. “I learned early on that designing the things I wanted to see brought to life gave me so much more joy than trying to interpret an employer’s point of view. When you design from the heart, that’s what resonates with people.”

His works can be viewed in buildings around Toronto such as at CBC Headquarters, Toronto City Hall, TD & BMO banks, The Prince’s Trust Canada, Rogers Headquarters, and the Ontario Trillium Foundation. “I think it’s important for companies today to realize the land they are on was once another culture’s territory. Public acknowledgments of that fact are such a great first step towards being on the right side of history.”

Patrick currently resides in Toronto, but still makes regular journeys home to Red Lake to stay inspired, be with family and teach art classes to the next generation of Woodland artists.